The incubation period for oyster mushrooms 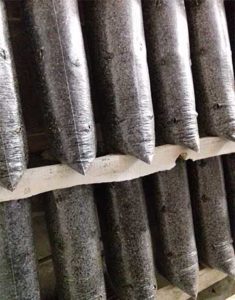 The incubation period is the time from the inoculation of the mycelium until the appearance of the first primordia.
During this time, the mycelium grows in the mushroom block, the substrate turns white.

Read more in the article “when is mycelium ready to fruit?”

How to tell when mycelium is fully colonized

After whitening of the substrate, its color becomes more saturated. The substrate is denser, monolithic, as the hyphae of the mycelium are tightly intertwined.

Around the slits, a white compaction of micellar tissue (primordial ridge or ring) is formed, from which primordials then emerge.

At this stage, the incubation is considered complete.

Read about the formation of primordials here

How many days does incubation last

The incubation period lasts from 12 to 16 days, subject to all microclimate conditions.

On what day do primordials appear? It depends on such factors:

For example, a strain of lung oyster mushroom “pph” gives primordia on the 8-9th day of incubation. And the K-17 strain, depending on the conditions listed below, from day 12 (rarely) to day 16.
When buying mycelium or ready-made blocks, ask the seller for a strain passport.

The passport must indicate the conditions of the incubation period and the timing of the appearance of primordia.

2. composition of the substrate

Substrates, which consist of the straw of various cereal crops, overgrow 1-3 days longer than substrates from sunflower husks. Therefore, primordia in straw substrates are formed 1-3 days later under the same climate conditions during incubation.

When comparing the same strain on different husk substrates (one hydrothermally steamed, the other pasteurized in a tunnel), primordia appear at about the same time +/- one day.

But, according to my observations, if, after pasteurization, fermentation of the substrate is carried out in a tunnel, the release of primordia is delayed by 2-3 days. I am against fermentation, I will write an article about it soon.

We were doing an experiment.

10-11 tons of substrate were pasteurized in my tunnel. The substrate consisted of a mixture of barley and wheat straw, with the addition of 4-5% alfalfa hay. We made 800-900 blocks weighing 12-12.5 kg at a time.

We sold 500 blocks immediately after sowing, the remaining 300-400 pieces were kept for ourselves.

Sometimes it was important for me to have many mushrooms at the same time. For example, before the New Year.

Sometimes it was more important to have not so many mushrooms, but that they were sold every day.

Therefore, in some batches of the substrate, we inoculated some of the blocks with 2.7% mycelium, the second part – 4%, and the third part with 5% mycelium. the formation of primordia begins 2-3 days earlier with a higher dose of mycelium.

We used mycelium grown on oats.

We usually put 360 grams of mycelium into each block, which is 3%.
Lower than 2.7%, we did not try to contribute even out of curiosity. Since blocks even with such a percentage of mycelium overgrown for 1-2 days longer than with 3%.

Summer strains and blocks, where a large amount of mycelium (5-7%) was added, can form primordia on the 10-13th day from inoculation.

5. observance of the incubation conditions

Humidity in the incubator

At low humidity in incubation, primordia appear 5-7 days later, compared with the incubator, where the air humidity is 80-82%. Of course, you need to compare the same strain.

High humidity (above 92-93%) is detrimental to primordia. They cannot evaporate their own moisture and die. Or they turn into stroma.

What humidity should be kept in the incubator, and how to regulate it, read here.

The growth rate of mycelium in the substrate depends on the room temperature.

At a low temperature in the incubator (below 17-18 degrees), the block overgrowth period is extended for 25-30 days, and clusters begin to appear on the 27-35th day.

Details about the temperature in the incubator.

How to find out that primordials will appear soon

Many summer strains, not only pph, are very early maturing and can form primordia on days 9-10.
Therefore, after compaction of the primordial ring (12-15 days for other strains), we carefully observe the mushroom bags:
first, a white fluff appears in the slots, then the first (signal) primordia should appear on 5-7% of all blocks.

After this has happened, we begin to change the climate within 3-4 days – that is, GRADUALLY!

Important point!
Be sure to reduce the humidity to 87-90% so that the primordia do not die from condensation. 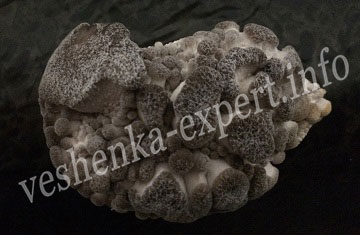 The surface of the cap is too small, and the growing oyster mushroom does not have time to evaporate moisture from the cap.

A clear indicator that the humidity is high is the so-called “white dandruff” or “semolina” – scales on the cap.

Often the shape of the cap is bent, and the plates (hymenophore) grow.

When to remove mushroom blocks from the incubator

If you have a two-zone growing system, uniformly overgrown bags should be transferred to the growing chamber.

It is better to do this at the stage of a clearly expressed white compaction of the mycelium in the slots or a single appearance of primordia (they are called signal). 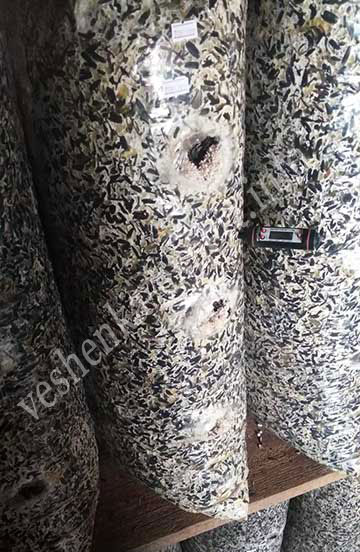 If on some bags of the same batch there is no white compacted ring around the perforations, they are left for a couple of days in the incubator, for better overgrowth.

In the photo – a mushroom block, ready for transfer.

At first it is a white mass, similar to polyurethane foam. A few hours after the release of this mass from the slot, you can see that it consists of white grains – each of them is the germ of mushrooms.

Then the grains grow, this is the “pin stage” – when the primordia looks like a lot of tailor’s pins gathered in a bundle (which are in the form of needles, with a ball on one of the ends).

These “pins” then change color from white to grey.
This is the phlox phase.

If you leave the batch in the incubator at the pin stage for another 1-2 days, the druse may suffocate from a large amount of CO2 or the mushrooms will pull the leg.

Sometimes it even happens that the hat is not formed at all, just a black dot is visible at the end of the thickened barrel-shaped leg. Drusa looks like a hedgehog because the legs grow in different directions, resembling a hedgehog that has put out its spines for protection.

Such clusters do not grow and do not turn into mushrooms, even if such a block is taken out into a room with a normal climate.

It is better to break off such clusters immediately so that they do not take away nutrients. After a break, a new, full-fledged primordia emerges from the same slots in 2-3 days.

Details about the formation of primordia

For the initial stage of the formation of mushroom clusters (a state similar to foam or cotton wool), an increased level of carbon dioxide (1300-1500 ppm) is required – then the cluster contains a large number of mushrooms.

Therefore, it is not recommended to abruptly add fresh air to the incubator, even if its temperature does not differ much from the room.

Loose druse with a small amount of mushrooms is formed if the bags are taken out of the incubator until compaction and fluff in the slots appear in the growing chamber, which works without recirculation.

In general, when growing oyster mushrooms, it is not recommended to drastically change any climate parameters.

Whether the block should lose weight during the incubation period

The mycelium grows, increases its mass, but consumes the nutrients of the plant mixture – due to this, it grows.

In addition, it breathes, releasing water and carbon dioxide from the substrate block.

Due to this, the bag loses weight. Under the correct conditions described above, this is a small loss – 2-3% of the initial weight.

If the air humidity is low, the losses can be more significant, up to 10-15%.

What is the smell when incubating oyster mushrooms

What smell should a mushroom bag have? Only the steamed substrate has a characteristic smell of steamed raw materials. Moreover, it seems to me, and to many mushroom growers, that the smell in the incubator is much more pleasant than a large pile of steamed straw or husks on the inoculation table.

After four to five days of mycelial growth, the smell changes to a slightly sweetish, with a milky tint.

I had about 1000 even-aged bags in my incubator. On the sixth day after sowing, I slowly walked around all the rows, stopping at the place where the smell changed – it became sharp and unpleasant, and clearly “straw”. In this place, I found a block without perforation – it happened that workers skipped one or two blocks when cutting perforations.
I cut them, and most often they overgrown, then yielding a crop. If there were foul-smelling spots under the film, we took them out and threw them into a pit with biohumus.

On days 7-8 (and on husks often a day earlier), my straw bags were emitting so much CO2 that it was difficult to stay in the incubator for a long time. It feels like there is simply nothing to breathe, as if you covered yourself with a blanket with your head. But, as I wrote above, in small incubators, where the substrate is of different ages, this is practically not felt.

What humidity is needed when overgrowing mushroom blocks