Problems of substrate colonization by mycelium

Dear readers of the site “Veshenka expert”! Gradually I will translate all the articles. But, while the links lead to Russian-language posts. Use google translate to read.

If the mycelium grows poorly and spots of non-growth form, do not rush to blame the mycelium seller.
Uneven fouling of mushroom blocks is possible for many reasons.

For example, low temperature in the incubator (14-17 degrees) affects the rate of hyphae germination in the substrate mass. While the hyphae slowly grow, bacteria, which are quite comfortable at this temperature, actively multiply in the space between the film and the substrate, where moisture collects. Because of this, dark areas appear in the block.

Read how to properly incubate.
Or, you have incorrectly heat-treated raw materials.

Consider the main types of defects and how to eliminate them.

Spots on an oyster mushroom block

They are isolated roundness, formed in the early stages of incubation and are clearly visible against a dark background of not yet overgrown husks. Sometimes noticeable even on the second or third day of incubation. 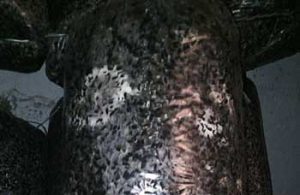 Such spots are formed around the caryopsis with mycelium. Most likely, these are hyphae of oyster mushroom mycelium, which has grown like a cobweb. Why some gifs behave this way, I cannot explain.

But, I know for sure – this does not characterize the mycelium in any way – either for good or for bad.

If the raw material is processed with high quality, these spots do not affect the overgrowth process.

On the 6-7th day of incubation, when all the husks or straw turn white, they intertwine with the rest of the hyphae and do not stand out. The yield of the batch also does not depend on whether there were such spots at the beginning of overgrowth or not.

Such spots are not at all like stroma, a dense white crust, which is described here. 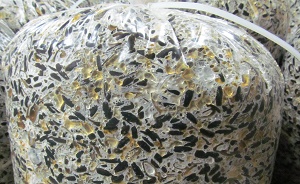 Sometimes under the film we see small spots of yellow, redheads or brown liquid. If these spots are almost transparent and have a pleasant smell, then the color appears due to staining with pigments from husks, straw or hay.

They are not dangerous and often disappear during fruiting.

But more often there are orange or yellow spots of non-growth on oyster mushroom blocks that are affected by bacteria.

Such packages have an unpleasant smell – sour, less often alcohol or ammonia. Such a spot looks like a yellow gelatinous formation or like a dark piece of straw or husk.

On a waterlogged substrate, yellow oyster mushrooms grow, often with a curly or wavy hat. 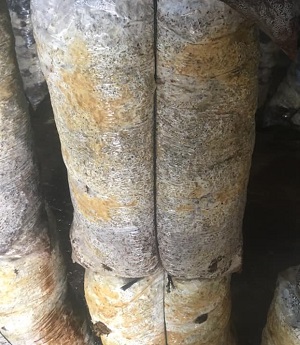 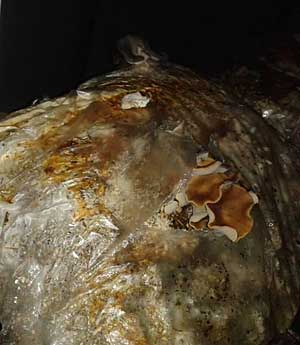 If the substrate is too wet, the primordia will turn brown and sticky. If you squeeze them with your hand, drops of water appear.

The second reason why the mushroom block often turns yellow is an attempt to cool the blocks sharply during incubation.

If in this case green spots of mold do not form, then we see yellow spots where mycelium does not grow.

To avoid the formation of yellow spots, you need to make a substrate of optimal humidity (68-69%) and observe the microclimate parameters in the incubator. More about it. 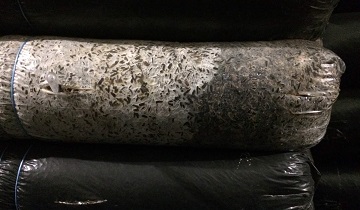 In the bag, a clear boundary is formed between the mycelium and the oyster mushroom substrate during overgrowth. Or it happens that the colonization of the substrate by mycelium proceeds normally, the substrate turns white, and then stops growing and darkens.

What prevents oyster mushroom mycelium from developing freely in the territory of the dark spot? Microorganisms to which the conditions in the spots are more suitable.

Such areas appear due to one of four reasons, or a combination of them:

Sometimes small larvae appear under the polyethylene in the area of ​​​​the dark spot (see photo here). It was they who ate the mycelium. Infected bags must be immediately removed away from the growing chamber, and the incubator should be treated with insecticides.

This is the most common type of defect (flaw).
Most often it occurs during the heat treatment of the substrate by hydrothermy and improperly conducted xerothermy.
It is difficult to distinguish oyster mushroom mycelium from mold in the early stages of growth, as most molds have the same white hyphae.
And only mold spores of different colors. It takes from 3 to 7 days for the spores to mature, and then you can see whose mycelium it is. 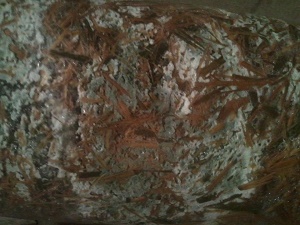 Most often, various types of trichoderma settle in the overgrown substrate, its spores are green in color: from olive to gray-green.

If the speck of mold is small, then the oyster mushroom hyphae eat it up, and fruiting subsequently proceeds normally. Large spots of mold, on the contrary, progress and inhibit the development of oyster mushrooms.

Many people are surprised that the mushroom block turned green on the 12th or even 15th day, and before that it was white. In fact, the mold was in the substrate from the very beginning.

But it was not visible, since the trichoderma hyphae are white, with a grayish tint. And when the mycelium of Trichoderma matured, we saw green clusters of its spores.

How to get rid of green mold on mycelium

To get rid of the problem with trichoderma, you need to know its cause.

There are three main reasons, I will list them, starting from the most common:

Violation of the regulations in any technology: 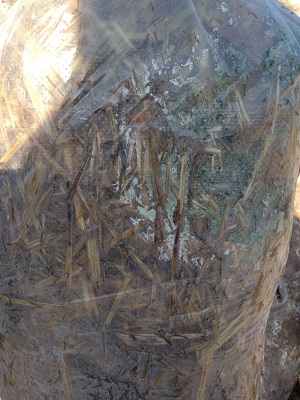 Often there is not one, but two, and even all three violations.

Green mold in this case is settled throughout the thickness of the substrate.

Sometimes the mycelium cannot begin to grow at all, and the oyster mushroom mycelium grains are covered with a gray-green coating.

As a rule, the quality of the mycelium has nothing to do with it – it’s just that, first of all, the mold begins to occupy the boiled grain, since there is a lot of easily digestible nutrition there.

And later, the hyphae of Trichoderma passes to the husk or straw that is poorer in nitrogen.

2. Violation of the microclimate during incubation

Infection is observed only under the film.

The presence of free water between the polyethylene and the substrate leads to increased growth of mold and/or bacteria.

Although when breaking it is clear that the entire thickness of the substrate is overgrown evenly, beautifully and does not contain the inclusion of trichoderma anywhere except the surface layer, such batches practically do not bear fruit. 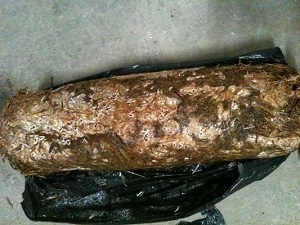 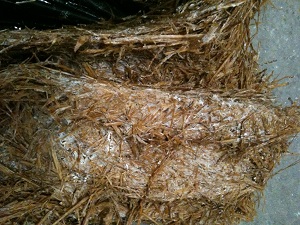 With a bacterial lesion, an unpleasant odor appears in the incubator and the bag. It is described above.

3. Infection occurs in the incubator

In this case, the mold is located only in the perforations. Inside, under the film, the entire mass in the bag is well overgrown, white. 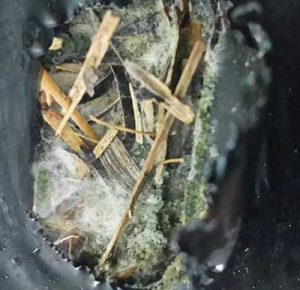 This suggests that the mold has settled in the room itself, and its spores sit in the perforation and germinate.

Most often, this mold is Trichoderma, but there are lesions with gray and black spores.

These are different types of mold, but you don’t need to know their name, as the method of getting rid of them does not depend on the type of mold.

How to get rid of mold in block perforation

In case of single lesions, you can remove part of the straw (husk) from the cut by hand, treat the hole with a rag with 5% hydrogen peroxide or sodium hypochlorite solution (use gloves, please!) and seal the hole with tape.

If almost all openings have mold, this indicates a high level of mold infestation in the room.

They are not visible to the naked eye. But if you sow the air on a Petri dish, on the third or fourth day it becomes overgrown with multi-colored colonies. It is necessary to empty the incubator and treat it with sporicidal disinfectants or fungicides. 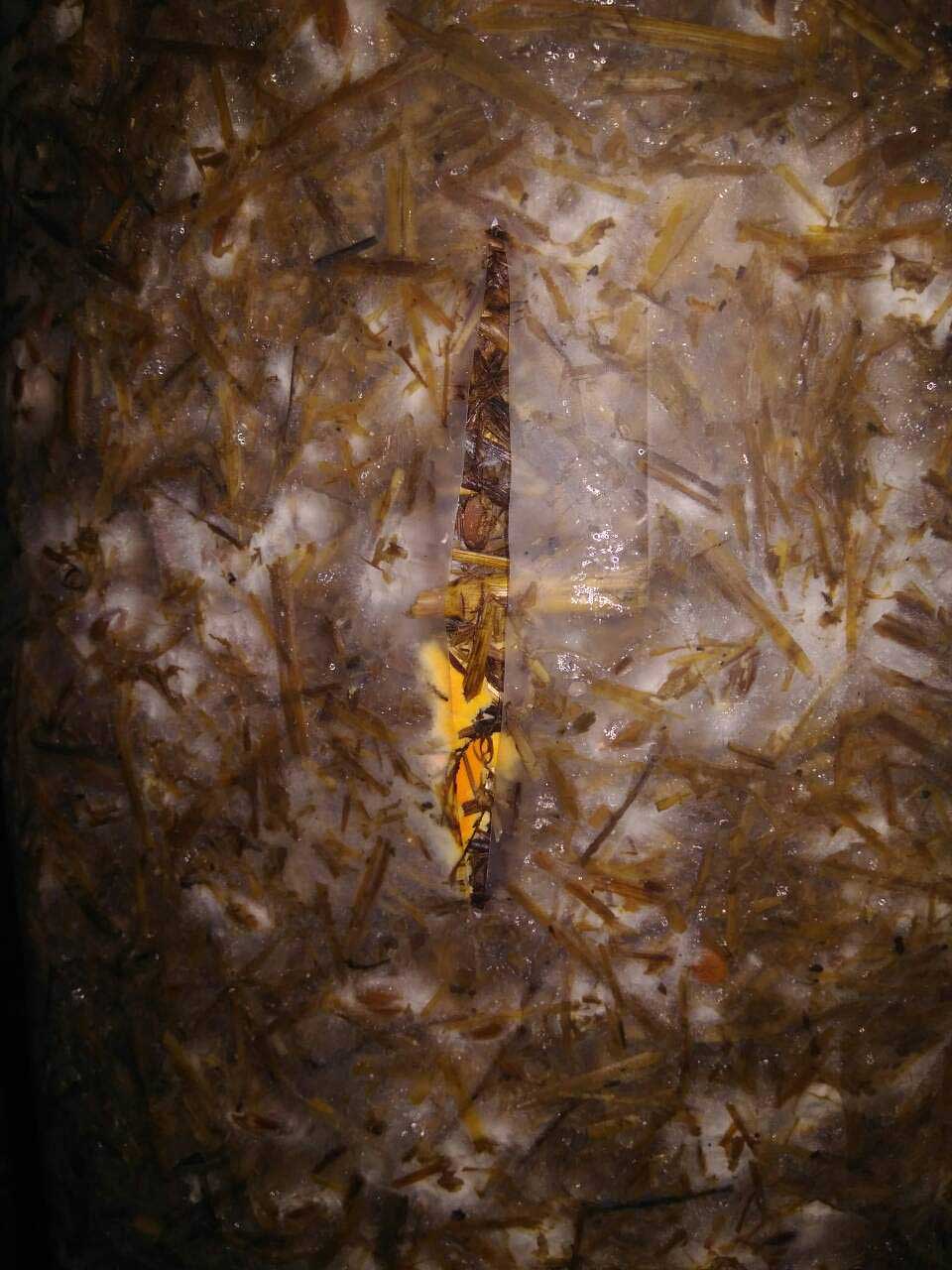 This mold needs to be distinguished from Slime mold – this is the organism that I will talk about next.

If you find an orange substance in a bag, especially if it goes into a slot, seal the perforation with tape and take this block away from the enterprise.

Release it from the film, bury it, and burn the polyethylene. Be sure to treat the room with chemicals such as Armex, Virocid.

If there are already overgrown batches in it, take them out to the growing chamber. You may not want to carry freshly made blocks during the disinfection, but try not to get the drug on them.

Do not wait until the incubator is free – you risk losing everything that is there.

Neurospora reproduces very quickly, it can infect the entire incubator in a matter of days.

Neurospora is a soil fungus.

Infection of sunflower husks occurs if the stubble of cereal plants was burned on the field before sunflower sowing, spores also get into the straw. 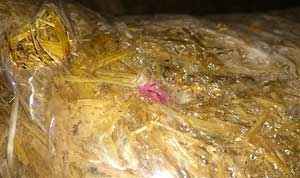 Neurospore is a rather rare type of mold for mushroom growers – it is also called “red bread mold”.

Its spores are orange-red or pinkish in color.

But if the spot is pure pink, it is probably another fungus, from the genus Fusarium. It infects the stalks of cereal crops, and more often appears in the straw substrate with insufficient heat treatment.

With hydrothermia, it appears if the straw is not soaked, but immediately poured with hot water.

On many old farms and poultry houses, even if the buildings have been abandoned for many years, specific pathogenic microflora persists. Most often, spores of various mold fungi. 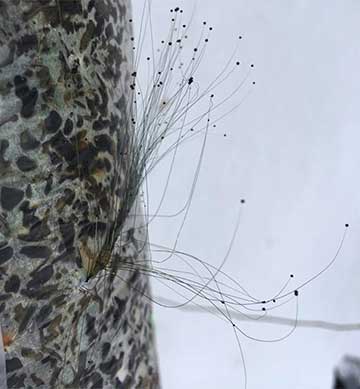 Among them is the species of mucoraceae – Spinellus fusiger. This mold appears in a slot and looks like long black threads with black sporangia balls.

What do we have to do? 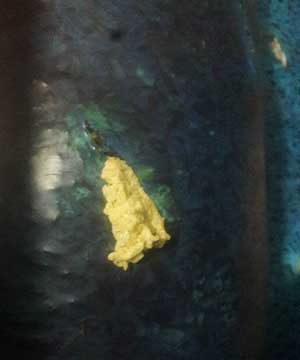 Sometimes when growing oyster mushrooms, you can meet living creatures of Myxogastria. They look a little like both mold and fungus. You can read about them on Wikipedia, the article is called “Slime mold”.

Most often they settle in greenhouses and in adjacent territories. When dry, it resembles withered polyurethane foam. When there is a lot of moisture in the air, it looks like yellow mold or grows in a slimy bunch.

This yellow slime has pseudopods that travel through the growing chamber at a speed of 1 to 2 centimeters per hour.
Slime mold is almost never found in the incubator. But the mushroom growers who sent this photo saw it in the slot of the overgrown block.

In this case, a complete disinfection of the room is necessary.

If it is impossible to take out all the blocks from the incubator, it is necessary to disinfect the walls, floor, empty racks, trying not to get on the perforations in the blocks. The room is disinfected with an antifungal drug or hydrogen peroxide 5%, or a solution of any drug containing peracetic acid.