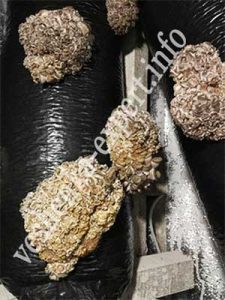 Why oyster mushroom does not develop

Almost all primordia growth defects are associated with violations of microclimate conditions:

In this case, the primordia become wet and slimy from condensation. They suffocate and die under a film of condensate. Mold settles on dead mushroom pins and they rot.

Ugly buds or an undifferentiated white mass is formed if the substrate is soaked, or if water is poured into the slots from the nozzles hung in the chamber.

Therefore, I repeat all the time: Humidification should be only in the air ducts!

In the photo we see a violation of gas exchange in the block. The bags stood close, overheated where they touched. When primordia began to grow in the room it was +16 and very high humidity of 95%. Therefore, primordia stopped growing and normal mushrooms did not form.

The reason for any anomalies in the development of oyster mushroom fruiting bodies is non-compliance with the technology of production of the substrate and / or microclimate disturbances in the incubation and in the growing chamber.

Primordia come out and dry up

Even if the total mass of pins is divided into individual mushrooms, they turning yellow, wither and dry out.

There are several reasons:

The climate in the chamber must be stable! Ventilation should work constantly, humidity and temperature should be regulated by sensors with controllers.

Something white in the mushroom block slot

Sometimes a white substance similar to fluff appears in the perforation, which does not turn into primordia. This is a perforated stroma. 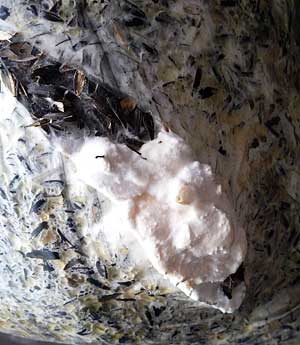 And under the film – a clean, well-grown substrate, without the slightest sign of stroma.

Then, instead of oyster mushrooms, a dense mass similar to cotton wool (see image) or cones grows from the holes, which do not turn into mushrooms.

There can be two reasons:

– Violation of incubation conditions when the substrate has already turned white.

With sharp jumps in temperature and/or humidity, the mycelium closes the hole, protecting the interior from adverse conditions.

Carefully remove the stroma, transfer the bags to the grow room.

If there is a normal microclimate, mushrooms will grow. Most likely, they will grow not from these holes, but from those where there was no hard crust of the stroma.

By the way, if the nozzles are not located in the air ducts and water enters the slots on the blocks, such an undifferentiated heap of stroma is also formed.

If a jump in the microclimate occurred during the origin of primordia, the growth process (morphogenesis) is disrupted and an ugly cluster of white tubercles emerges from the slot.

These cone-like growths do not separate into individual mushrooms.

Mycelium made at home or replicated many times may lose the ability to produce fruiting bodies. Such mycelium continues to multiply by cell division, forming growths that are not able to turn into mushrooms.

This substance has many underdeveloped mushrooms (photo on the left below), and turn into cones – ugly growths (center and right).

Sometimes balls are formed instead of primordia – the mass merges into one cluster, which looks like a cauliflower inflorescence, but fruiting bodies do not form from it.

I read on the forums a version that these are supposedly viral diseases that are transmitted with mycelium. Especially if the druse looks like the image on the right.

However, if a beautiful, powerful druse comes out of the cut, this just indicates that the mycelium is active and with good characteristics! 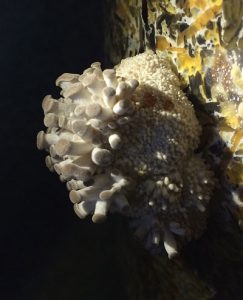 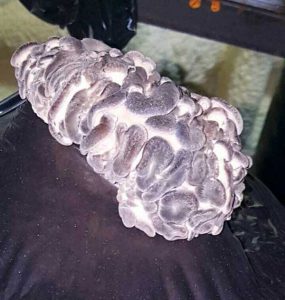 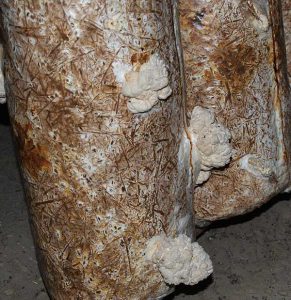 Even if the primordia grows together into one dense mass, without dividing into separate mushrooms, the quality of the mycelium is most likely not to blame.

During heat treatment of straw or husks:

During the incubation period:

Avoid short-term jumps in humidity and temperature at the final stages of incubation – they are most often the source of this cause.

In the picture on the right above, brown streaks are visible, as well as rusty wet spots under the film. This indicates an excess of water in the substrate – this increases the likelihood of ugly mushrooms.

If the incubation blew cold or even worse – frosty air. For example, to cool an overheated batch, it is quite possible that gas exchange was disturbed in the bag.
With the accumulation of excess carbon dioxide inside the bag, the mycelium may be damaged and lose the ability to form normal isolated fruiting bodies. Instead of mushrooms, growths form.

Other blocks in this batch are growing normal fruits – if they have not been affected. 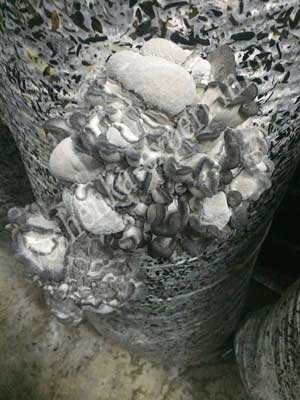 Here is his message: Hello. Larisa, tell me, please, what caused such a state of primordials.

Such cones instead of mushrooms, or a dense mass similar to mushrooms, but not divided into separate fruits, as a rule, appears when two or more factors are combined at the same time:

A bunch of oyster mushrooms that have stopped growing or have not split into individual mushrooms must be plucked!

No need to wait for some mushrooms to still develop and they can be marinated. The dead primordia begins to decompose, rots or dries up.

When rotting, the infection spreads through the air in the room, when it dries, the slot closes. Why do you need it?

As soon as you see that something incomprehensible has appeared, you have two signals: the climate must be corrected, the shapeless mass must be cut off.

All the reasons listed above, and in a few more cases: