Why mushrooms do not fruiting if the block is well overgrown 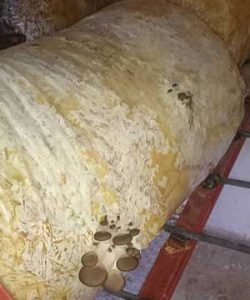 The block is well overgrown, but primordia do not appear

Why don’t oyster mushrooms come out and there are no mushrooms on a well-grown block?

This problem most often occurs in mushroom growers who grow oyster mushrooms at home – where there is no ventilation and equipment for air heating.

Why are there no mushrooms

Here are the main reasons:

If several causes act simultaneously, oyster mushrooms may appear after the elimination of some of them. 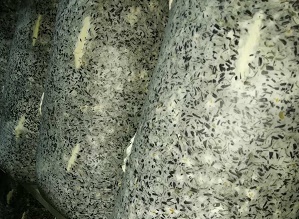 Be sure to check that the microclimate in your forcing chamber matches the data sheet for growing this strain.

For example, if the distillation has low humidity, the slots may dry out.
The mycelium in them dies from lack of moisture and, of course, primordia do not grow.

I want to emphasize that we are talking about a really WELL overgrown block. Above is a photo of the stroma bag.
It is obvious that he is not alive.

You see a photo of a live healthy mushroom block on the right.

Stroma is a thick layer of mycelium hyphae that grows between the film and the substrate, protecting the block from high temperature and low humidity.

Many people think that if bags of oyster mushrooms are dense white, it means they are well overgrown. 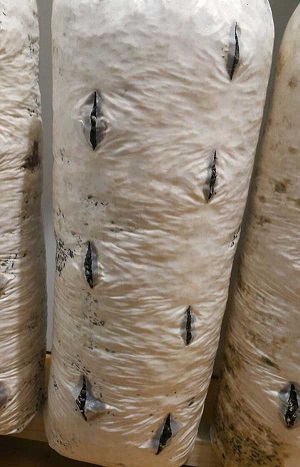 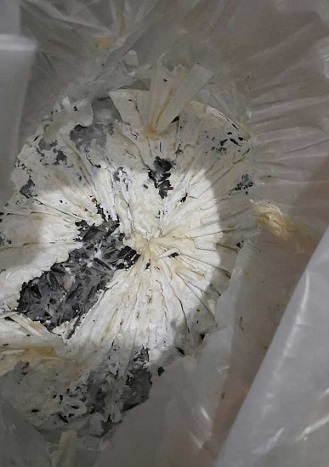 It occupies almost the entire space between the bag and the substrate, in some places there may be mushroom pins. Most often, the stroma is formed if the substrate was overheated during incubation. That is why it is important to monitor the temperature in the center of the block and not allow the temperature to rise above 32-33 degrees there.

Often (especially in the warm season) an overgrown oyster mushroom block does not bear fruit due to an incorrect transition from the incubation mode to the fruiting mode.

We measure the temperature of the center of the block – T3 and under the film (between the film and the substrate) – T2.
The air temperature T1 is measured not far (10-15 cm) from the selected block. This is a must!

If T1 has been stable for a long time, and the temperature of the subfilm layer T2 is higher than the arithmetic mean of the center T3 and air T1, then the primordia will come out with a delay or not come out at all.

After the start of fruiting, it is necessary to carefully observe the parameters of the microclimate in the growing chamber, since the presentation of the fungus depends on this.

Fungicide treatment of cereals and sunflowers in the fields

Another reason why mushrooms do not form on the block is that straw or sunflowers in the fields have been treated with fungicides or herbicides.

When using such raw materials, the growth of oyster mushroom mycelium is inhibited by these preparations, and the mycelium cannot bear fruit or the yield drops sharply.

It is not possible to determine whether there are fungicides in the husk or straw by external signs. A very large percentage of cereal and sunflower fields are treated with fungicides in years when there is continuous rain before and during harvest.
The amount of drug activity decreases to an acceptable level after 4-6 months. Therefore, problems with such raw materials occur in autumn and early winter.

Then the drug is inactivated and the yield can increase on the same straw or husk.

Toadstool mushrooms instead of oyster mushrooms 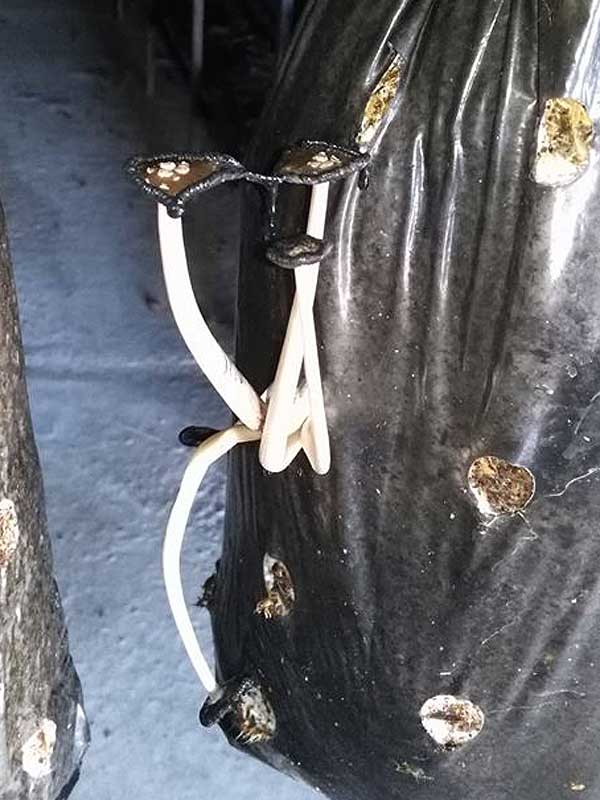 This grebe, which is shown in the photo, is a coprinus. It is they who most often grow instead of oyster mushrooms.

There are several types of them, outwardly they look alike, with thin legs, a young hat looks like a bell.

Only the color of the hat is different: for some, it is white at first, and then darkens, turns gray or blackens, and for some it is immediately gray. As it matures, the hat spreads out, turns black and, if the type of coprinus is called “ink”, it smears the hands.

Some types of koprinus are conditionally edible, but I do not recommend eating them, since you are unlikely to be able to accurately determine its type.

The appearance of foreign species of fungi on mushroom blocks indicates poor-quality processing of the substrate at low temperatures and insufficient heat treatment time.

Coprinus can signal that there is a lot of nitrogen in the substrate. But in combination with poor-quality steaming, this does not benefit oyster mushrooms.

Koprinus is especially common when preparing a substrate at home from straw, when, without preliminary soaking the raw materials, mushroom growers pour boiling water or hot water over the straw.

Why there is no second wave of oyster mushroom fruiting

The most common reason for the absence of the second wave is the low humidity of the substrate. In this case, the first wave is simultaneous and quite productive, 14-16%, but there is simply not enough moisture to reach the next fruiting.
If there is enough moisture, and the calorie content of raw materials is low, then the first wave, unlike the previous case, is weak, with a small number of primordia, and the second is not at all.

The second reason is that it is too cold in the growing chamber, 10-12 degrees. At this temperature, the mycelium does not have time to recover, and does not form the next crop.

If the temperature in the growing room is above the norm, from 20 degrees and above, the second harvest may also not occur for two reasons: