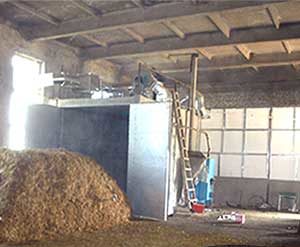 The tunnel for pasteurization of the oyster mushroom substrate is built according to the same principle as the tunnel for champignon compost. The difference is that the mushroom compost is steamed in a tunnel after fermentation. Therefore, when pasteurizing compost, other heat treatment modes are set.

I am not a compost specialist, so I will only talk about the possible modes of processing oyster mushrooms.

There are various technologies in which raw materials for oyster mushrooms are steamed:

The principle of tunnel processing is generally the same as with hydrothermy: spores that germinate in wet raw materials die during steaming in the tunnel from high temperatures (70-75 degrees). The difference is that hot water is used in hydrothermy, while steam is used in pasteurization.

For a small volume, you can build a small steaming tunnel – the smallest pasteurization chambers that I saw were designed for 1.5 tons of substrate.

But the fan in the tunnel has been running for at least a day and a half. If people live nearby, they are unlikely to like the constant hum at night.

It is also difficult for you – you need to control the process constantly – day and night. You can connect sensors that will send a signal to your smartphone if the temperature or pressure goes beyond the specified parameters. It is also important to ensure that water enters the steam generator on time.

The pasteurization tunnel is a steaming chamber with two gates.

You lay wet raw materials for steaming through the gate from the side of the substrate moistening area (dirty zone).
The second gate is located in a clean area, through which the finished substrate is unloaded.

There is a tray in the tunnel, steam comes through it.

The floor in the tunnel above the tray is made of wooden blocks or a metal I-beam (for loading a large mass). The bars are stacked so that there are gaps between them – the steam-air mixture flows from the tray through these gaps. From above, the bars can be covered with a strong metal-plastic mesh with a very small cell, so that less debris gets into the tray.

The tunnel equipment is a ventilation system, a steam generator and temperature control sensors.

When installing an automated control system for temperature sensors, the operator only monitors that the system works without failures, which greatly facilitates the whole process. As a rule, tunnels are built at medium and large enterprises (from 5-6 tons of oyster mushroom sales per month and more).

How the tunnel works

The ventilation system consists of a fan, to the round opening of which a pipe fits.

Two pipes are connected to this pipe: fresh air and recirculation. These pipes have dampers. When we open/close these dampers, we are adjusting the percentage of outside air and air/steam mixture coming in from recirculation. Also in the tunnel there is a separately located discharge pipe, also with a damper. All these pipes have the same diameter. The power of the fan and its pressure depend on the amount and height of the substrate layer.

A pipe departs from the fan, which goes to the tunnel tray.

The steam supply pipe from the steam generator is mounted in this pipe. Hot steam heats the raw materials and then pasteurization takes place.

The tunnel fan drives the steam-air mixture in a circle – this is recirculation.

When the temperature reaches 67-69 degrees, the pasteurization process begins, which lasts from 10 to 20 hours.

During pasteurization, the fresh air damper is open by 10-15%, this amount of outside air is enough to prevent the development of anaerobic microorganisms.

Anaerobic microorganisms are those that can reproduce with a minimum amount of oxygen. Because of them, oyster mushroom blocks rot during incubation.

The pasteurization process is controlled by temperature sensors.

What kind of steam generator is needed for the tunnel

The power of the steam generator is measured in kW and kilograms of steam produced per hour.

For xerothermy and pasteurization tunnel, the total amount of steam is calculated based on the substrate load. 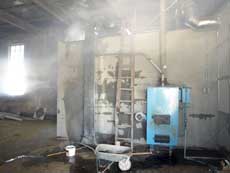 The need for steam is from 10 to 20 kg/h per ton of soaked vegetable raw materials, depending on the design features of the tunnel and the heat treatment mode.

In the photo – my steam generator for 100 kg of steam.

This steam was enough for steaming 11-12 tons of straw substrate, with the addition of hay.

There are solid fuel, electric and gas steam generators.

All modern models of steam generators are equipped with automation.

In solid fuel steam generators, you can set the mode to the desired amount of steam, and the fan will turn on according to a given program.
Gas steam generators have an automatically switched on burner.

First, we pour water with lime or soda ash on chopped straw mixed with hay and / or sunflower husks. These components are used in different proportions.

How much hay to add depends on the amount of nitrogen in all components of the mixture.

The finished substrate must have at least 0.6-0.7 nitrogen measured by the Kjeldahl method.

Lime or soda ash is needed to increase the pH of the substrate to 8-8.5.

You can read more about this here.

Substrate soaking takes place either in a rotating barrel or on a concrete pad. From the barrel, the substrate is folded into a slide for heating.

If you are soaking raw materials on a concrete pad, you need to water it in layers and compact each layer for better wetting. Each next layer is thrown over the previous one in order to eventually form a collar. 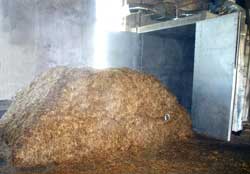 Heated collar near the tunnel gate

After a day, the collar must be thrown to another place in order to saturate the air with oxygen.

If the substrate is not moist enough, when transferring it, it is watered in layers with water. Humidity at this stage can be from 70 to 75%.

During steaming, the humidity most often falls rather than rises. Therefore, it is necessary to determine experimentally.

The optimal moisture content of the oyster mushroom substrate after processing in the tunnel is 70-71%.

A day later, the transfer is repeated again. During such preparation, the straw and husks are softened, which then facilitates the growth of the mycelium in the blocks.

Also, when the pile is heated, mold spores first swell, and then hatch. Then they die during steaming.

Unswollen spores can withstand temperatures above 100 degrees. They can only be killed by sterilization in an autoclave. But swollen and hatched spores are more vulnerable – they die at a temperature of about 65-70 degrees for 7-10 hours. Therefore, it is very important to keep the pile for three days (including the day when we soak the substrate) and to transfer the substrate from place to place twice. We will make sure that as many spores as possible hatch.
A day after the second transfer, the substrate is thrown into the tunnel.

The duration of heat treatment depends on the quality of raw materials and the composition of the substrate mixture.

The substrate is heated to a temperature of 67-69C and kept at this temperature for at least 12 hours. More often 14-18 hours. Then it is evenly cooled to 25-30C. Control over the uniformity of cooling is carried out, focusing on the difference in the readings of the sensors installed in the thickness of the substrate and the sensor in the tunnel tray.

I don’t know how relevant the topic of fermentation and fractional pasteurization is in your country. But in countries where the Russian language is still known, these are topics of heated discussions with fierce opponents and supporters of the methods.

More recently, many mushroom growers carried out fermentation after pasteurization.

Fermentation is a process that lasts from 20 to 36 hours at a temperature of 50 to 45 degrees.

It allegedly leads to the development of beneficial microflora that eats nutrients available to competitors. According to this theory, oyster mushroom itself, unlike its competitors, eats cellulose rather than readily available carbohydrates. I do not believe in this belief. I could not find any scientific papers confirming that the microflora that is formed as a result of fermentation somehow affects the processes occurring in the substrate.

When I first started working, in 2008, I also fermented the substrate after pasteurization. In those years, all mushroom growers did this.

Then we abandoned the fermentation, pasteurized the raw material and immediately cooled it. There was no difference in terms of overgrowth of mycelium and in the amount of yield.

On the contrary, the quality of the substrate even improved, it overgrown more evenly.

My opinion – fermentation is not needed.

It only lengthens the time that the substrate is in the tunnel. We spend not only time, but also electricity to run the fan. And it is impossible to predict the influence of this process on the overgrowth of mycelium.
It is much more important to choose the right raw materials, humidity and pH, this has a much greater impact on yield.
Now many mushroom growers have abandoned the fermentation stage, and pasteurization is carried out for at least 20 hours.

I will say from experience that pre-tunnel preparation is much more important for good quality – two well-carried out transfers allow the collar to be saturated with air oxygen.

At the same time, the temperature of the substrate rises to 40-55 degrees, which leads to the activity of a certain microflora and has an effect similar to fermentation: the microflora absorbs all carbohydrates, the raw material softens mechanically during transfer, chemical processes of splitting cellulose and lignin begin in it.

A method in which, after the first rise in temperature to 70 degrees, the temperature is lowered, and then raised again and pasteurized a second time.

Honestly, I don’t see any logic in this method. This is done allegedly so that when the temperature drops, unkilled spores awaken and the second pasteurization destroys them.

It is unlikely that under the conditions of production it is possible to control the processes of development of microorganisms and their destruction. It is not a fact that when the temperature drops, the spores will begin to open. It is also not a fact that exactly those fungal spores will open, which will then interfere with the growth of oyster mushroom mycelium.

And does it make sense to specifically provoke the growth of unknown bacteria or mold, so that later they can be killed or not killed – after all, you cannot 100% say exactly which processes will occur with such temperature fluctuations.