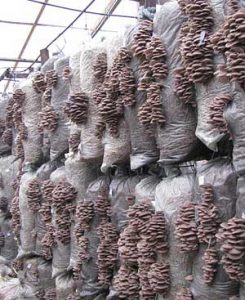 Oyster mushrooms do not grow without lighting.

In complete darkness, mushrooms do not form at all, a thin stem grows from primordia, like a needle with a black dot instead of a cap.

On the incubation of mushroom blocks, light is not needed. From the moment the primordials are formed, it is imperative to turn on the lamps.

How much light do oyster mushrooms need

Opinions of mushroom growers differ.
Some turn on the lamps for 12 hours, others – from dawn to dusk, so that it is like in nature.
Some have a lot of lamps in the room and it is as bright as a sunny day, others have only a few lamps on.

It makes no sense to turn on the lamps for 24 hours a day. Both from an economic point of view and from a logical one. Oyster mushroom is a living creature that has been adapting to the environment for tens of thousands of years. And in it, by the way, every night is dark.

The lack of lighting when growing oyster mushrooms affects the shape of the fruiting body, the leg will reach for the light source.

However, even weak diffused light is enough to form a beautiful mushroom. Therefore, if you have light in the room, and you see an elongated leg, most likely this is the effect of excess CO2 levels.

Fruiting bodies are fleshy, rich, beautiful brown or gray-brown in color. In addition, they more easily tolerate any microclimate jumps – in moisture, in temperature, and even (in a certain range) – in CO2.

Make sure that direct sunlight does not fall on the hat, otherwise a burn may occur.

Shade windows on the sunny side – paint over with a thin layer of liquid lime, or make a canopy over the window to create a shadow.

In the photo above – a batch of blocks with strain M-5, which were made at my enterprise and grew at my client under a film ceiling in a greenhouse.

If you have a single zone system and there are windows in the oyster mushroom growing chamber, cover them with black film during incubation. Many mushroom growers believe that light does not affect incubation. But, according to my observations, in the light the blocks grow more slowly and not evenly. 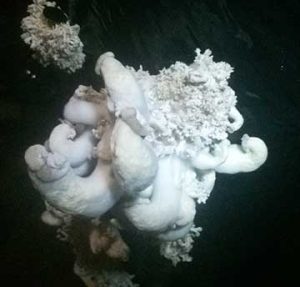 In the photo on the right is an oyster mushroom that has grown without light and ventilation.

I will write my point of view on grow room lighting from my own experience.

At my enterprise there were two chambers for growing oyster mushrooms – both 8mx25m. In one room, the central corridor divided the room into two parts along, there were 5 energy-saving white light bulbs, 30 watts each. In another room, the passage was across, and only one such light bulb hung.

I did not notice a significant difference in mushrooms – neither in color, nor in growth, nor in stretching the legs.

Where there was only one lamp – it hung high – at a height of 3.5 meters and illuminated everything, even the corners of the chamber. In addition, there was a 5 cm gap between the foam ceiling and the wall, along the entire perimeter, and a small amount of light from the street penetrated there.

Another interesting observation – we noticed: when the mushroom ripened en masse, the workers carried out the harvest at night. By five in the morning they finished picking, and four hours later, by the time I arrived, there were again a lot of grown bunches.

At first I thought that the workers simply missed these bunches. But several times I harvested myself and noted individual druze. At 4 in the morning it is still too early to collect it, as it is small, and by 9 o’clock in the morning the druse has already grown.

I concluded that since mushrooms grow fastest at dawn, they can turn on the lighting at that time. Therefore, we turned on the lamps from five in the morning to twelve in the afternoon. The result suited me.

What lamps are needed for growing oyster mushrooms 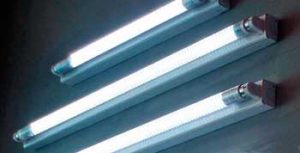 It will be enough lighting of 100 lm (maximum 150) lumens per 1 sq. m.
Now on each lamp the manufacturer writes the number of lumens.

This is about 1 energy-saving or LED light bulb per 15-20 squares.

You can also use low pressure horizontal mercury lamps – such as those in the photo. They distribute light more evenly.

I’ve read recommendations online that using blue bulbs supposedly improves yields and disease resistance.
If you want to check how blue light affects oyster mushrooms, you can do an experiment and see if the yield from blue light really increases.

The difficulty is that the same batch of blocks needs to be grown under different lighting, but otherwise the same conditions.

It is necessary to record the weight of all picked mushrooms from all blocks separately for each room – separately “white” and “blue”.

For example, with blue lighting from 30 blocks, so many kg were collected in the first wave, and so much with white (from the same number of blocks). And such an experiment should be carried out several times in a row, at least 3 batches of blocks.

If each time the yield is higher, feel free to put blue lamps everywhere.