Deformed oyster mushroom is the effect of carbon dioxide 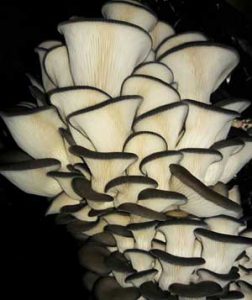 The more CO2, the worse for oyster mushrooms

Curvature of oyster mushroom fruits can be of different shapes.

We do not always see such a deformation, where the stem of the mushroom is long and the cap is small.

It depends on the concentration of carbon dioxide, temperature and humidity in the growing chamber.

The age of the oyster mushroom at the time of exposure to CO2 is of great importance.
Therefore, the leg can be both thin and thick. The mushroom cap may completely stop growing and remain small.

But if the microclimate is put in order in time, the hat will continue to grow and the mushrooms will become almost normal.

Sometimes the whole oyster mushroom is pulled out, as in this photo.

What is the acceptable level of CO2 when growing oyster mushrooms?

Consider the stages of development of the mushroom block.

Here the value of carbon dioxide is not regulated. And its concentration reaches 5-10 thousand ppm.

Therefore, you can not take warm air from the incubator into the growing chamber.

I had such a case. It is clearly seen that the clusters look like with an excess of carbon dioxide, see the photo above.
But the client claims that he uses only outside air for ventilation. He does not have a device, so he cannot measure CO2.

Until I thought to ask how he heats the growing room. He said there was no heat. The air from the incubator entered the growing chamber to heat it.

So the mushrooms stretched out, because along with the heat, a large amount of carbon dioxide also got there.

As the block overgrows, starting from 10-11 days, 15% -20% of fresh air can be added to the ventilation system of the incubator.

There is no need to add more air, since the increased amount of carbon dioxide contributes to the formation of a large number of primordia in each bunch.

If primordials begin to appear en masse in the incubator, without ventilation, they develop with defects.

Does oyster mushroom get enough oxygen?

Most often, the incorrect development of the fruiting body occurs when a thick stem grows and the cap is small.
The oyster mushroom stretches its leg, trying to get away from the vapors accumulated near the bunch – moisture, carbon dioxide and other metabolic products (photo below).

But this is not true – in fact, in this case, the ventilation system was not made correctly. There simply is no normal air exchange.

The fan power is not enough or the air ducts are small in diameter, or there are not enough cup nozzles, or the flow rate is low. It happens that the hood is at the lowest point – this is also wrong.

Where should the hood be, read here.

It happens that the hat does not develop at all and looks like a black or brown dot.

Such druses (the first and second pictures ↓) will no longer turn into full-fledged mushrooms.

The sooner you take them off, the better. They will not take nutrients from the substrate. And the second wave will go faster.

If you cut off the ugly mushrooms and you bring all climate indicators back to normal, then the second wave will be simultaneous and beautiful (see on the right).

In the picture in the center, the mushrooms also look discolored.

It was the flue gases that affected them. Therefore, when you are designing ventilation, pay attention to where the boiler is located. The chimney should be away from the outside air pipe for the grow room. 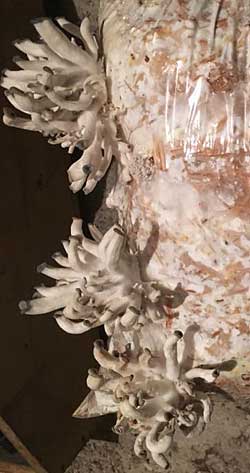 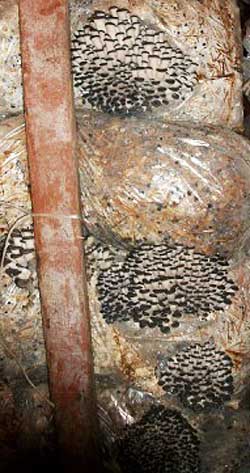 The values ​​are different for each strain. 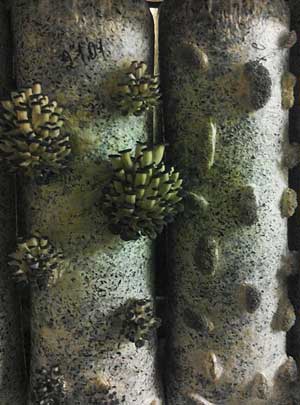 In the photo – too much carbon dioxide

When buying mycelium, check this parameter with the manufacturer. If you talk “in general” – the content should not exceed 1000 ppm. Although, some strains and 850 ppm can hardly withstand.

When there is no CO2 sensor, the mushroom shape can serve as an indicator. If he does not pull his leg, does not turn his hat up, then he has enough air.

The reason for the long stem of the oyster mushroom is the stagnation of carbon dioxide near the druse.

Therefore, one cannot say “there is not enough fresh air” – in this case, the airflow is not of high quality and the air exchange is insufficient.

This often happens in winter, when the mushroom grower saves on heating and turns off the hood at night.

In this situation (pictured), you can still save bunches and primordia on a bag nearby.

To do this, you need to increase the flow of air from the street.

You may not be able to heat the room to the optimum temperature.

At the same time, primordia will develop more slowly, but the mushrooms will grow in a commercial appearance, and not with a thin long leg.

When the appearance of the mushrooms is acceptable for sale, you can close the street damper a little.

Be sure to ensure that the recirculation flow rate is at least 8-9 meters per second. 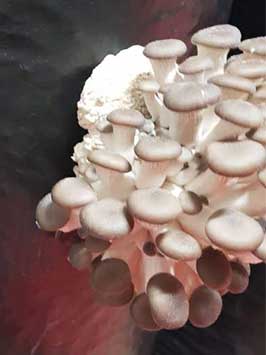 Sometimes it seems that the leg of the mushrooms is stretched, although this is not so.

Here is an example on the right.

Primordia was flooded with condensate from moisture drops, some of the mushrooms died, the other continued to grow.

But between the surviving mushrooms, the dead primordia are clearly visible.

Because of this, the bunch at this stage of formation seems rather loose and normally developed legs look elongated.

After a couple of days, the hats will grow, close the space between them, and the legs will not be visible.

Which CO2 sensor is used in the mushroom grow room

It is advisable to purchase a device for measuring CO2.

They come in different types: infrared, electrochemical and cheap. Cheap electronic devices stop working in the third or fourth month. Therefore, it is better not to buy them.

An infrared sensor is more expensive than an electrochemical one, but it works for a longer period, up to 10 seasons. A huge advantage – it does not need verification and calibration.

Do not confuse: there is equipment that measures the amount of carbon monoxide, its formula is CO. This sensor is not suitable for us.

Best of all, the fruiting bodies themselves report the excess of the ppm level. A thick stalk of oyster mushrooms always indicates a violation of the climate.

As soon as you see that the primordia, dividing into separate mushrooms, began to grow in step – it’s time to add street air. Open the damper gradually, no more than 5% in 8-10 hours, while increasing the speed on the exhaust fan.

Deformation of oyster mushroom from exposure to carbon dioxide

Where does the excess carbon dioxide come from in the mushroom growth room?

The appearance of each individual mushroom and druze as a whole depends on the stage at which the excess of carbon dioxide was, how long it was, and on the impact of other climate factors.

In other words, when a combination of different factors and damage will be different. 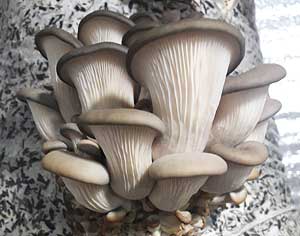 It is formed with a slight excess of carbon dioxide and a temperature and degree of moisture comfortable for the strain – photo on the right.

2. If the temperature is above the optimum, and the humidity is below, the oyster mushroom arches up

Moreover, it can completely wrap up and become like a flower, reminiscent of a tulip. And some mushroom growers say that it looks like a gramophone, a saxophone, a glass. They also write that the oyster mushroom twists, curled up into a tube or the hat is bent up.

The reason is always the same – the high content of carbon dioxide.

Only the edges of the cap can bend up (on the right) – in this image, the mushrooms have already outgrown. In overgrown fruits, the cap often twists up, especially with poor air exchange. 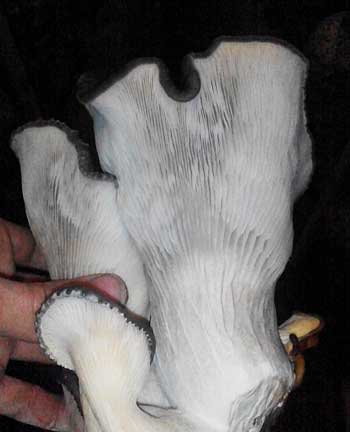 3. And here there are twisted, and up wrapped, and wavy mushrooms

Plus, the legs are long.
There is no ventilation and no humidifier.

The air is dry, there is no air exchange, therefore a weak loose primordia is formed.

Of the entire druse, one, maximum three mushrooms survive.

The rest suffocate from carbon dioxide, which accumulates near the mushrooms.

The leg becomes thick as a barrel, often hollow inside, and the hat is corrugated.

The stem of the mushroom grows in diameter, exposing the plates (hymenophore) for a larger evaporation surface.

At the same time, spores are quickly formed, and there is practically no growth of the cap.

With high humidity, moisture condenses on the primordia and evaporation from the mushroom cap slows down, especially at the early stages of drusen formation, so deformations may differ.

Sometimes the leg does not just stretch, it also twists and presses against the bag, photo on the left below.

mushrooms snuggle up to the block 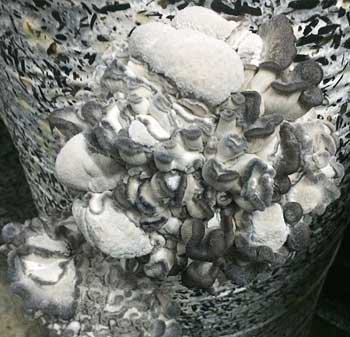 Removal of CO2 from the oyster mushroom growth chamber

1. In order to avoid deformation of the fruiting bodies, it is necessary to calculate the ventilation – the diameters of the air ducts, cups, the power of the fans.

Ready-made tables with calculations and a diagram of a climatic chamber for rooms with a load of up to eight tons of substrate.

2. Adjust the microclimate parameters so that there is an air flow near the clusters, which will ensure the removal of carbon dioxide and moisture. To do this, buy an anemometer. Sufficient speed from cups is 8-10 m/sec.

3. Place the sensor in the growing chamber, in one of the rows, not far from the growing drusen, and constantly monitor the level of carbon dioxide.

4. CO2 can be adjusted automatically in the oyster mushroom growing chamber.

There are two ways – one is easier, but not quite right. When ppm is exceeded, the sensor sends a signal to the controller, which turns on an additional exhaust fan.

The second option is to prescribe a single response algorithm for all controllers (for example, based on the Arduino platform) or buy a computer program to adjust the microclimate in the oyster mushroom growing chamber.
The controller will automatically open the fresh air damper, closing the recirculation by the same %. In this case, the temperature and humidity will change, the controller must open the hot water tap that goes to the heat exchanger and turn on (or off) the humidification nozzles.

For the growth of oyster mushrooms, it is much more important not to have fresh air in itself, but to properly calculate air exchange with sufficient removal of carbon dioxide and their own evaporation from mushrooms.