How to get rid of mushroom flies 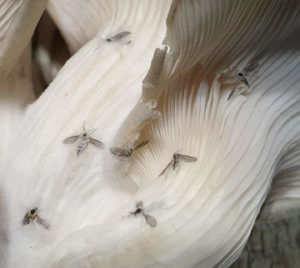 By the word “mushroom flies” mushroom growers mean all parasitic insects that eat the substrate and mushrooms.
It doesn’t matter what it’s called:

How to get rid of them, I will describe in this article

By the way, a description of all these pests is in a separate article.

The incubator is the most vulnerable place, but usually mushroom flies do not breed there, but arrive from the growing rooms or the waste block dump.

It is better to use chemical preparations according to the schedule, for prevention, than urgently, when there are already too many midges, and the mushroom blocks are black (since the flies have eaten the entire mycelium).

To track the number of insects in all areas of mushroom production, it is necessary to hang an adhesive tape for insects.

Processing should be carried out only if their number exceeds several dozen on the tape.

Note! Sticky tapes do not remove midges; they cannot be used to get rid of midges and mushroom mosquitoes. They serve only to signal that insect parasites have appeared, and it is time to take action.

The area around the enterprise

If you stack processed blocks on the territory, parasitic insects will definitely breed there, and then fly to the incubator to the smell of fresh blocks.
Depending on what you need the blocks that yielded the crop for, you need to do something with them right away:

As soon as possible, release the substrate from the film and compact it in the pit.
When watering, add chemicals to the water that destroy eggs and insect larvae. Chemical preparations with the active substance lufenuron, such as Lufox, are very effective.

Lay out the blocks separately from each other, preferably under a canopy. Make sure they dry, not rot. We removed the film immediately before drying. If you do not remove the polyethylene, then the side on which the substrate lies begins to rot, and not dry.
Rotting substrate (as well as other plant and food residues) has a specific smell that attracts insects. Therefore, if your business is located in a rural area, make sure that local farmers do not set up a food waste dump next to your growing chambers.

In the incubator and growing chamber

Chemical spraying with insecticides on mushrooms is strictly not permissible! This is possible only before the appearance of primordia and during the interwave period.

It is impossible to eat bunches of oyster mushrooms that have come under spraying.

Chemical treatment is carried out in an aerosol way: the insecticide is diluted according to the instructions and pumped to the nozzles of the humidification system, if they are built into the ventilation system. If there are blocks in the incubator, they may remain indoors.

What to do when the mushrooms are already growing, and you find a midge, sciarid fly or other insects? 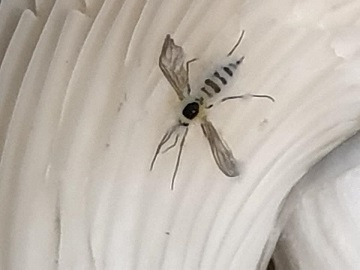 It would be the right decision to throw out the blocks and treat the empty room with insecticide in a quality manner.

If the midge appeared at the very beginning of the formation of primordia, you can try to treat it with a chemical preparation. But, you will lose a lot of time inhibiting the appearance of mushrooms.

If you do not slow down the development of primordia, you run the risk of getting mushrooms with a residual amount of an active chemical preparation and poisoning your customers.

Recently I was asked the question: “is it possible to spray aktara (active ingredient thiamethoxam) directly on growing mushrooms?”. This is absolutely not allowed!

If you have few blocks and few flies, the perforations that the fly ate should be treated with dichlorvos and the hole sealed. You can do nothing more and disinfect the room after the blocks bear fruit.

If there are many damaged slots (or many blocks), do this:

If after this spraying the flies have not disappeared – do not import new batches of the substrate!

After fruiting, take out the infected blocks as far as possible from the enterprise. And treat the empty chamber with insecticides. Or immediately remove the film from the blocks and make vermicompost.

The older the blocks, the more likely it is that midges will settle in them.

The danger is that they lay their larvae in blocks, and the larvae feed on the substrate. And they multiply exponentially.
The adults then disperse throughout the facility. They are especially attracted by the smell of overgrown blocks.

What insecticides are allowed in mushroom growing?

There is no list of chemicals specifically for mushroom growing.

Choose insecticides with the shortest possible waiting time and the instructions for which it is written that they are used indoors.

All these substances are addictive, so it is necessary to alternate compounds of different groups: for example, after treatment with a pyrethroid, use phosphorus organic compounds, then neonicotinoids, and again pyrethroids.

It does not make sense to treat the substrate with the above preparations to get rid of midges – they are not intended for this. 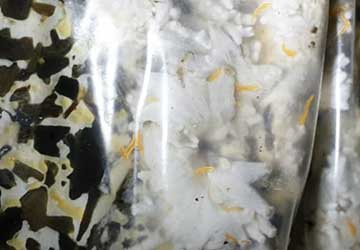 Orange larvae under the film in oyster mushroom blocks

Adding dimilin and other similar substances to the substrate that block the process of insect molting is ineffective. Since almost all of them decay in an alkaline environment.

Mushroom growers say that in the first two or three batches of the substrate, when dimilin was added, the flies did not lay larvae. But then, despite the use of this insecticide, the larvae in the substrate appear again.

And this situation clearly indicates that the substrate processing technology was chosen incorrectly.

On the production of substrates.