What to do with spent oyster mushroom mycelium 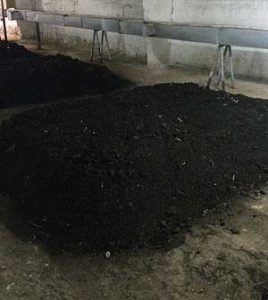 Old mushroom blocks that have spawned should not be left near the growing chambers. The substrate rots in a plastic bag.

A mushroom fly settles in it, which lays larvae. It is because of the old blocks that problems with parasitic insects can begin on your mushroom farm.

Read here how to get rid of them.

Where can I put the spent mushroom blocks, what can be made of them?

I, a veshenka-expert, will tell you about my experience.

You can produce biohumus. This is a high quality natural plant food. Biohumus is suitable for all types of cultivated crops. It improves the structure of the soil and increases the content of nutrients – exactly those that plants need, but were not used by oyster mushrooms.

The easiest way to make biohumus

Dig a few pits, you will gradually fill them with substrate. And then take out the finished fertilizer.
Depending on the volume of the substrate, determine the size of the pit. Remove the film from the bags and tamp the substrate not too tightly.
Water the mass in the hole to keep it moist. Wet substrate turns into fertilizer faster.

If you are making a substrate using the hydrothermal method, you can water the pit with water after steaming the plant material.
If you add lime to the raw material for steaming, first check the alkalinity of the drained liquid. Perhaps in your region the soil is already calcareous, then it is better not to use this water.

It is advisable to cover the pit from above with polyethylene or tarpaulin so that the top layer does not dry out. The compost is overripe and decomposed by soil microorganisms and worms.

After 5-10 months (depending on the season for laying the pit and the type of raw material), a bio-fertilizer will be obtained.

Straw turns into a homogeneous brown substance with a pleasant smell, greasy to the touch.

The husk composts worse. Add cow, goat or horse manure, chicken droppings to it in layers. You can also make slurry from chicken manure and periodically water the pits from above.

During decay, the mass warms up and even if there was some kind of infection, it will disappear.

You can start biohumus production as a business

If you have a large amount of substrate and have free premises, you can master the processing of raw materials using prospector worms. There are firms that sell worms that are accustomed to processing oyster mushroom substrate. 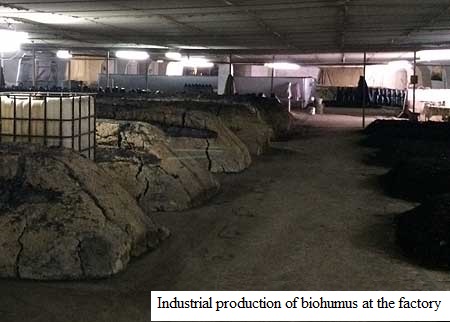 To do this, heaps are made from raw materials, doused with slurry from chicken manure and previously obtained humus. Heaps are arranged one after another in the room.

The worms themselves crawl out of the pile that they have already processed.

This is a more expensive method, but it also gives more profit: in addition to biohumus, families of worms can be obtained and sold.

A business needs warm rooms so that the worms do not freeze out in winter, and certain rules for composting.
As a rule, firms selling worms advise on the technology of compost production and keeping worms.

In addition to fertilizer, mushroom production waste can be used as mulch for trees, shrubs and aisles for any plants.
Free from polyethylene and slightly dry the mass, and then spread it under plants or between rows.

Microorganisms, molds (which love a humid environment) and mycelium die when dried. Therefore, oyster mushrooms will not grow from dried straw or husks laid out in the garden.
In the future, when watering, the mulch will get wet, and gradually rot.

But there already multiply soil microorganisms that do not pose a danger to plants. Including green trichoderma, which causes a lot of trouble for mushroom growers.

For plants, this soil fungus is a friend, as it devours mold putrefactive fungi that plants suffer from.

Soil fungi and bacteria process fungal protein and husk or straw cellulose, thereby improving soil structure and fertility. This mulch is suitable for all types of plants.

One mushroom grower wrote on the forum: if blocks of husks are laid like mulch, and then the soil is dug up along with the husks, nothing will grow there in a few years.

I don’t even know what to say about this… In theory, the husk cannot have such features as to negatively affect plants.
It decomposes slowly, loosens the soil, improving its properties.

My acquaintance the mushroom grower grew strawberries only on the husks. A layer of spent blocks lay on top of the ground. He planted strawberry bushes in this layer and ran drip irrigation. And everything grew well.

My opinion is that the spent substrate is not suitable for food.

You can try to feed the animals if your mixture consists of straw and hay. There are authors who claim that there is a lot of protein in such waste.

But keep in mind that this is a mushroom protein, not a vegetable one. In order for animals to eat such food, they must be accustomed to it from childhood. In any case, this mixture should take up no more than 10% of the diet.

The substrate must be absolutely white, without traces of green or black mold, without signs of decay.

Will chickens peck at waste?

Most likely – yes, they like to shovel garbage. Perhaps they will find larvae, the remains of grains, some pebbles. But it is impossible to consider the spent substrate as a significant feed in the diet of poultry.

If the bags have already yielded but are still tight and free of stains, you can take them out of the grow room and leave them in the yard. Find a place where there is always shade and it is convenient to water the soil. 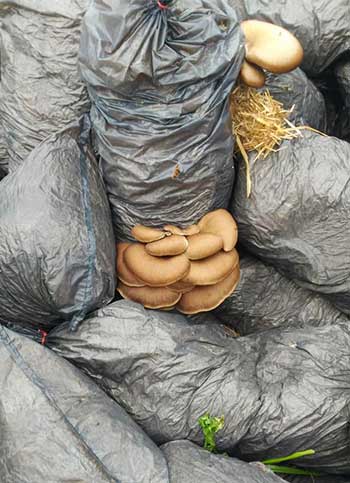 Although, it is better to place mushroom blocks on a surface covered with concrete or gravel.

After freezing, the mycelium is activated – if the nutrients in the straw or husk still remain, new hyphae will necessarily germinate to the perforations and fruiting begins.

These bags will be fruiting in the spring, and we will see such a picture as in the photo – beautiful, heavy and dense druses of oyster mushrooms.

Outdoors, the oyster mushroom always grows large and heavy, with a lot of tender mushroom tissue in the cap. The clusters contain 5-6 mushrooms, but the diameter of the caps is larger than when grown indoors.

Young dense mushrooms can be 10-15 cm in size. Regardless of the strain, the color of the cap is light – a shade of coffee with milk, if there is a lot of sun. And dark brown, sometimes with a gray tint, if there were cloudy days during growth.

If the substrate in the bags is loose but not dry, try to reanimate them:

Opinions of mushroom growers on this matter are opposite. Someone says that they use the substrate as fuel and are very pleased, as it saves firewood. Someone thinks that the labor that is spent on drying the substrate is not worth such savings – after all, firewood burns longer and gives much more heat.

If your substrate is dry and light after two or three harvests, try drying it out and using it as fuel.

It is desirable to dry under a canopy, as the substrate becomes very wet during rain. The film must be removed from the substrate during drying. But, if the contents are falling apart, cut the polyethylene lengthwise in five to six places, for better weathering.

Dry straw and husks do not burn very well. Therefore, it is first necessary to warm the boiler with firewood, then throw in the dried blocks.

I had a 65 kW solid fuel boiler. We threw 3-4 straw blocks on hot coals from firewood, and put more firewood on top.

Disadvantages of this fuel:
you need to often throw it into the boiler, it burns out quickly, there is a lot of soot.

Most likely, the mushroom protein and the organic compounds of the straw do not burn completely and give resin inside the pipes. We cleaned this resin with iron plates on a wooden handle (like a small straight shovel).

Can you reuse mushroom substrate?

That is, put the old substrate in bags with the new substrate so that it gives a new crop.

Nothing will come of this venture!

If you steam new straw or husks and put pieces of the old substrate mixed with fresh substrate in layers in bags, the mycelium will NOT germinate in the freshly treated plant mass and you will NOT get a crop.

If you are interested in conducting an experiment, read this article, the last section Substrate mycelium.