In the process of overgrowing mycelium, the humidity in the incubator must be increased.

If you have only one incubator that contains blocks of different ages, keep the humidity in it within 80-85% all the time.

Consider how to raise the humidity in an incubator containing mushroom blocks of the same age.
Mycelium during growth in the substrate goes through several visually distinguishable stages.

This stage lasts from the first to 6-7 days after inoculation.

At the first stages, the growing mycelium actively breathes and releases moisture at the same time.

Growth starts from the grain. The whitish hyphae of the mycelium move to the sides like strings and white spots of overgrowth appear. See photo.

This looks like asterisks, which is why many mushroom growers call the “asterisk stage”.

For normal gas exchange, it is necessary to keep the humidity in the room about 70-75%.

What happens to mushroom blocks with excessive moisture (air/substrate)

At high air humidity (more than 90%), the amount of moisture released by the overgrown substrate will be less than optimal.

If the substrate is also slightly waterlogged, the underfilm layer of the substrate will be too wet. Since moisture from the center of the block migrates to the surface. This is fraught with the development of bacteriosis or fungal diseases.

When the moisture content of the substrate is higher than the optimum, liquid collects in the corners of the bags. And many mushroom growers lower the air humidity to 60% in the incubator. They hope that excess moisture from the bags will evaporate into the air.
But it doesn’t work that way.

In a wet substrate, not only water exchange is disturbed, but also gas exchange. Therefore, the mycelium overgrows worse, and the development of foreign microorganisms is possible, for which such an environment is more comfortable.
It would be more correct to bring the heat treatment of the substrate to normal than to violate the incubation conditions.

During hydrothermal treatment, the optimum moisture content of the substrate is 68-69%.

Read About the problems and defects of the overgrowth of the substrate.

2. The second phase of overgrowing of the mushroom block

From 6-7 to 9-10 days, mycelium hyphae grow along the substrate and intertwine with each other. Because of this, the substrate changes color, it becomes light cream or whitish (depending on the strain).
Straw can simply change its color – it becomes light brown with hints of yellow. And only on the 7-8th day a whitish tint appears.
Beginning mushroom growers think that the mycelium overgrows incorrectly or nothing happens to the straw at all. It takes some experience to learn to see this color change.
At this stage, active gas exchange takes place and the temperature inside the block decreases. Humidity should be gradually raised to 80%.

What will happen to mushroom blocks with insufficient air humidity

Perforations dry up. They become black, mycelium hyphae do not grow to them.

The primordial ridge is formed in the depth of the hole, and later the primordia form a long stem to grow up to the slot.

Read about the primordial ridge here.

When the holes dry up, fruiting is delayed and primordia begin to crawl under the film. And not only near the perforation. If the incubator is dry, the pins of the fruiting bodies come out between the substrate and the film throughout the bag, as in the photo below.

Some criticize my opinion and say that after 10 days of incubation, the holes cannot dry out. Because the perforations in the blocks supposedly do not dry out for my critics.

This stage continues from the 10th to the 15th day. The bags become white, the contents of the substrate are slightly visible through the whiteness. 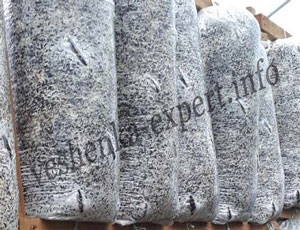 In the photo – fluff is visible around the well-grown slots. This incubator complied with all conditions.

If the white color has become dense, looks like a film or a dense slippery substance that glitters – this is stroma.

More about it in this article.

Usually, the stroma appears later, but with severe overheating of the blocks, it can also manifest itself on the 15-16th day.

If at the second stage you did not start to raise the humidity, then the moisture from the slots is released more intensively than necessary and the substrate begins to dry out first in the perforations (holes).

If, however, we continue to keep the humidity at 70% at the third stage, the enhanced evaporation of moisture occurs not only around the perforations, but also from the depth of the substrate.

Overdried incubation substrate gives a lower yield. And at humidity below 80%, the appeared primordia begin to dry out.

Therefore, at least from the 10th day, it is necessary to raise the humidity!

If the blocks are overgrown at low humidity (50+/-10%), primordia do not come out into the slots, but are formed either near the holes or under the film. 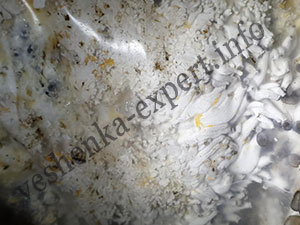 Oyster mushrooms under the film and yellow larvae

Please note that the yellow stripes near the mushrooms under the film are the larvae.

That is, there is also a problem in the quality of the preparation of the substrate.

Nota bene! If you have blocks of different ages in your incubator, keep the humidity in it at 80% all the time!

If at the same time mold appears in the bags themselves or the slots, this does not mean that you need to reduce the humidity!

This means that you have:

What humidity is needed when primordia appears

If there are blocks of the same age in the incubator and you correctly raised the humidity at the second stage, then at the 3rd stage you need to gradually – 2% per day – raise the humidity to 92-93%.

Very important!!! Keep humidity above 90% only until primordia appears.

As soon as one or two signal primordiums appeared (that is, the very first primordia of all blocks) – the humidity must be reduced by 2%. After 5-6 hours, reduce by another 2% to bring to the humidity, which is indicated in the passport of the strain for the primordia stage.

If dried primordiums are watered with a hose, you will only worsen the situation.

Firstly, if you see a fading bunch, it means that it has already died. Watering over such mushrooms will only cause mold to appear on them.

Secondly, oyster mushrooms do not need water from outside. It feeds on a liquid nutrient solution from the substrate. And oyster mushroom needs external moisture only to balance the evaporation of its own liquid from the surface of the cap.