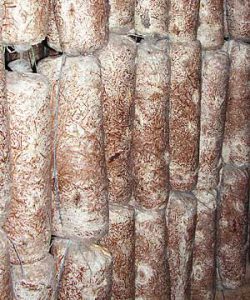 The priority process in the first few days of incubation is the growth of oyster mushroom mycelium – after all, it was introduced into the substrate in large quantities.

Then grow microorganisms that survived the heat treatment of raw materials. They enhance the release of heat, water and carbon dioxide.

The amount of carbon dioxide in the first stages of incubation is not monitored and regulated – it can reach 5000 or more.

The oyster mushroom block overheats due to the vital activity of pathogens, that is, the temperature inside the substrate rises uncontrollably.

If you can’t lower the block temperature as described below, you most likely have an incorrect heat treatment of the substrate.

We contribute to the processes of correct and rapid growth of the substrate by creating certain conditions for incubation.
The most convenient and predictable way to regulate the climate is to set a certain temperature in the incubator and keep it constantly.

The temperature must be indicated by the mycelium manufacturer in the passport for the strain.

The temperature at which the mycelium grows rapidly in the substrate ranges from 18 (for winter strains) to 22-23 degrees.

It is important for you to choose a specific value from this range, and keep a certain temperature for the entire incubation period – for example, 22 degrees.

If in winter it is difficult for you to maintain such a temperature, set 19-20 degrees, but not lower.

What happens if the temperature is lower or higher than optimal when growing oyster mushroom blocks?

Some types of mold and bacteria are activated in the substrate at low temperatures. But oyster mushroom mycelium grows slowly. Therefore, the substrate overgrows unevenly and has spots.

Bacterial or mold infection may begin – it depends on the quality of the substrate treatment.

Even if we assume that the raw materials are steamed perfectly and the blocks overgrow without defects at a temperature of 12-15 degrees, you will lose time.

Since the mycelium will germinate into the substrate at this temperature not earlier than in a month.

You can keep the temperature 23-24 degrees.

Then the mycelium grows even faster, but the probability of overheating of the substrate is much higher.

If the blocks are heated at this temperature, it will have to be lowered to 21-22C. Only this should be done gradually, since sudden cooling provokes the release of water under the film.

If the air temperature in the incubator is above 25C, the growth of the mycelium will be inhibited due to the fact that in the center of the block the temperature will be at least 36-37C.

Mycelium may die if the temperature is not reduced to 32-33C within 30-40 hours.

If you are preparing raw materials by pasteurization or sterilization, it is possible that the temperature in the block will not rise above 33 degrees.

Therefore, you must determine at what air temperature in the incubator primordia appear earlier and the yield is higher.

Condensation (liquid or water droplets) under the film

Oyster mushroom mycelium is a living organism. It absorbs oxygen from the air in the process of growth and respiration. It also emits CO2 and water. In this case, self-heating occurs and mushroom packages can “fog” from the inside – moisture condenses under the film. In part, this is also due to the growth of a large number of other microorganisms present in the processed raw materials.

If the heat treatment is carried out correctly, there will be no problems with overgrowing when moisture condenses under the film.

The incubator room must be equipped with a ventilation system.

Until the last stages of the incubation period, it works in recirculation mode to remove heat from the blocks and mix the air.

What temperature should be in the center of the mushroom block?

The mycelium develops normally if the peak temperature in the center of the package is from 28 to 32 degrees. This temperature usually lasts about 1.5-2 days, then begins to decline.

This occurs 6-9 days after inoculation.

It is not necessary to specially lower the temperature of the oyster mushroom substrate.

If the raw materials have undergone the correct heat treatment, the temperature will drop by itself, as a result of the fact that the mycelium has grown and has ceased to release so much energy.

Blocks overheat when the temperature at the peak of heating exceeds 36-37 degrees for more than 20 hours.

The task of the technologist is to organize the blowing of the bags in such a way that they do not overheat, and that the temperature in the room remains stable (equal to the set one).

The temperature in the incubator can be controlled automatically or manually.

Do not use outside air to control the temperature of the incubator! If the mushroom blocks are overheating and the recirculation airflow is not providing heat removal, you should turn on the air conditioner to mix the air inside the room. 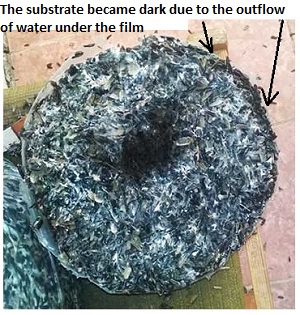 It is unacceptable to take outside air in large quantities. This causes the outflow of water under the film.

Because of this, overgrowth problems begin: non-overgrowth spots, bacterial infections and mold in the under-film layer.

The temperature above 36 degrees for more than a day in the center of the bag is critical for the substrate, and the developing mycelium dies.

He dies right in the center. On a cross section of such a bag, a dark, as if burnt, spot is visible. This spot is located in the center of the block, against the background of an overgrown white substrate.

The secondary germination of mycelium in the core of the substrate occurs with a slow decrease in temperature.
The main consequence of block overheating is that the development of the mycelium slows down and subsequently the yield decreases.

It is important to avoid overheating, but a sharp drop in temperature is much more detrimental to blocks.

Water is released between the substrate and the film with a rapid decrease in temperature (by 5-6 degrees in 30-40 minutes).

In this case, the problem of mycelium fading is exacerbated by dark bacterial spots or green mold spots under the film.

How to cool mushroom blocks before the appearance of primordia?

During the day, the temperature in the room should fall by 1-2C.

Several methods can be used to lower the temperature in an incubator.

The third method is used with a two-zone system.

You need to put shelving in a spare room. The temperature in it should be 16-170C. You take blocks of one batch into this room for a day or two.

And when the temperature in the center of the block drops at least two to three degrees, you can transfer them to the growing chamber.

Do temperature changes during incubation affect the yield of oyster mushrooms?

An unstable climate affects the growth of mycelium in the substrate.

If the violations of water and gas exchange in the block were insignificant, it is possible that the yield will not decrease.

There are vulnerable periods of incubation when temperature fluctuations affect mycelium growth to a large extent.

In the first days after inoculation, a prolonged decrease in temperature is undesirable, since mycelial growth may stop. It is important not to allow a sharp fluctuation in temperature (decrease/rise) for 6-8 days, when the blocks are warming up.
Above, I described the outflow of water under the film.

In such blocks, fruiting often does not begin if trichoderma has appeared.

Or there may be ugly mushrooms, which also have an unpleasant odor due to the growth of bacteria in the under-film layer.