Mushroom strains. What is the best type of oyster mushroom? 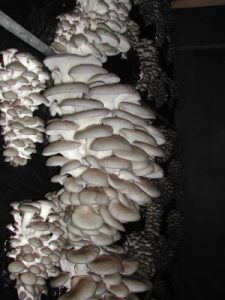 I thought for a long time whether to write an article about oyster mushroom strains.

After all, only large industrial enterprises use the mycelium of world-famous firms, and it is unlikely that their technologist will read my article. (there should be a smiley here)

Smaller laboratories most likely have their own classification of strains, known only in the country where this manufacturer is located.

But then I decided that I would write about the main features that need to be considered (and it doesn’t matter what name the strain you use has).

If you want to know what strains are grown in those countries where most of the population still understands Russian, check out this article of mine.

There are many photos and descriptions of different strains that are used in winter or summer.

Google now does translations quite correctly.

Here I will tell you general information and some features of working with a different set of strains in one room.

What does “mycelium strain” mean?

A mushroom strain is a culture that has a certain set of characteristics.

All these qualities are determined by a set of genes.
It is this set that provides a variety of appearance of oyster mushrooms and various microclimate conditions for growing.

The concept of strain is also used for microorganisms. It is analogous to the concept of “variety” for plants and “breed” for animals.

The optimum temperature for different strains of oyster mushrooms ranges from 8 to 26 degrees Celsius. According to this feature, the strains are divided into three groups: universal, winter, summer.

What is the best strain to use?

Below I will answer the question “Why?”

Keep in mind that most of the discussion on the forums that the mycelium is not as good as it used to be is due to deficiencies in ventilation, humidification and heating systems.

But mushroom growers do not like to admit their mistakes. They like to blame the mycelium for everything. Of course, mycelium also comes in different qualities. But 99% of the time it’s not his fault.

Watch my video about mycelium.  With English subtitles.

What determines the color of oyster mushrooms

First of all, from the group features of strains.
Pulmonary oyster mushroom (Pulmonaris) has a brown color.

The line of the “K” group is dark gray, with an admixture of brown or light coffee tint.

The line of the “P” group is gray and light gray.

The color of the fruiting bodies, described in the characteristics, is manifested under optimal climatic conditions of cultivation.

See what a different but always beautiful color the oyster mushroom has. 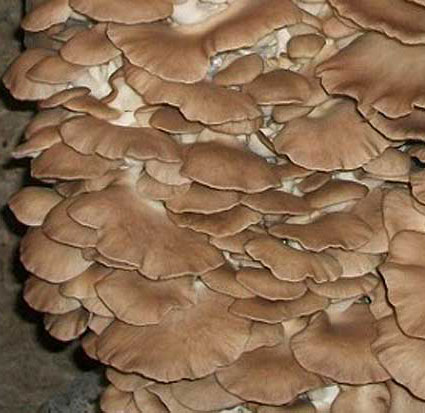 line of the “P” group. Do you see the coffee shade here? (Because it is)

Gray color is typical for the “K” line

What circumstances affect the color of oyster mushrooms?

Fruits of a more saturated, dark shade are formed if they are grown:
• in natural light, such as in greenhouses or rooms with windows,
• at a temperature below the optimum. Light gray strains may become light blue or even blue in color.
At high temperatures, the oyster mushroom brightens.

15-20 years ago, mainly the so-called “shock varieties” of oyster mushrooms were grown. To start their fruiting, a temperature shock was necessary – a sharp cooling of the batch after incubation to initialize the appearance of primordia.

Now such strains are not used. On the contrary, the temperature cannot be lowered sharply: firstly, so as not to pull moisture under the polyethylene, and secondly, so as not to flood the primordial rings and cuts on the bags with condensate.

But, as before, to start fruit formation, you need to gradually lower the temperature in the room, or transfer the overgrown bags from the incubator to the growing chamber.

Read the article about incubation

Two strains in one room 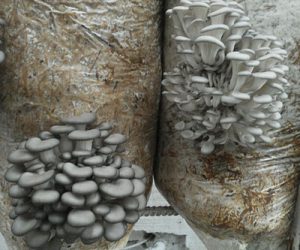 Growing in one chamber two strains that do not coincide in terms of incubation/fruiting, with different optimum temperatures and humidity, lead to a change in the appearance of the mushrooms of one of the strains.

The photo shows two strains in one growing chamber.

The K-17 strain (in the photo – the block on the left) develops quite well at a carbon dioxide concentration of 900 ppm. He has a dense, plump hat, strong small legs.
And for strain K-15, such a concentration is fatal: oyster mushroom pulls a leg, caps are light, thin, fragile. It is designed for summer cultivation.

In summer, only fresh air enters the ventilation, and it normally grows at CO2 levels up to 600, maximum 700 ppm.

That is, if you want to grow several strains in the same room, select varieties with the same requirements for climatic conditions.

Please note that each strain has its own characteristics:

Some strains are more susceptible to bacteriosis than others.
Some strains can withstand large changes in temperature (or humidity), while others are very sensitive to microclimate changes.
There are strains that, when moisture gets on the primordia, will continue to grow, and there are those in which the primordia die from the condensate film.

You need to find the varieties that will be most suitable for the ventilation and humidification system that you have.