When is mycelium ready to fruit? 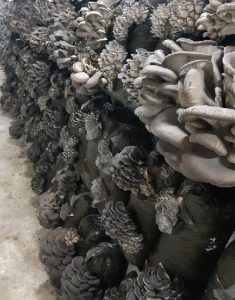 In this article, we will analyze when does it start fruiting mushrooms and when to transfer mushroom blocks from the incubator to the growing chamber.

How to tell when mycelium is fully colonized

Be sure to wait until the substrate is completely overgrown and becomes monolithic!

Determination of density comes with experience; there is a video about this https://youtu.be/5aixhzbW-rs. (at 6:50sec)

See also how a living, well-grown block differs from a substrate covered with a white mass called “stroma” in this article.

How to understand that the oyster mushroom block is ripe?

If the bag turned white and became dense to the touch, and the slots are well fluffed up, you can transfer it without waiting for the mushroom pins to appear.

When primordia appear, the batch must immediately be taken out to the growing room. The signal for transfer is the formation of 1-2 primordia per 5-10% of the bags. They are called so – signal primordia. Avoid mass bunching in the incubator.

Incubator has a high content of carbon dioxide, and if the bags with the substrate are not moved in time, the mushrooms pins will die. But it will be visible on the second, and even the third day. Therefore, many mushroom growers do not believe that mushrooms suffocated due to high CO2 levels.

Such primordia look like withered or dead. They become yellow and wilted. Be sure to pick such dead mushrooms so that the infection does not settle on them. From the same holes, a normal bunch will begin to grow in 4-5 days.

How quickly oyster mushrooms grow after the appearance of primordia depends on the microclimate in the growing room.

When will mushrooms appear in oyster mushroom blocks?

In short, we can say that oyster mushrooms will begin to bear fruit in an average of 21-24 days.

Although it happens that a month has passed after the blocks were made, but there are no mushrooms. It depends on several factors.

There are early ripening strains, the mycelium of which overgrows in 9-10 days, subject to favorable conditions.

On the 10-11th day, primordia already appear in such strains, and the mushrooms grow for 2-3 days.

Such is the summer strain of pulmonary oyster mushroom pph, you can read about it and other strains in this article.

There are strains in which the mycelium matures from 16 to 20 days. When buying mycelium, ask for a technological map, which indicates the ripening time and the necessary conditions for the growth of mushrooms.

With the right ratio of essential nutrients and trace elements, the mycelium grows very quickly. It gives primordia two to three days earlier than the substrate, which is not balanced in composition.

High-quality heat treatment of plant raw materials is also important: if the mycelium does not spend energy on fighting competitors and growing into wetted areas, the substrate overgrows quickly, within the time specified in the strain data sheet.

My author’s articles began to be stolen, so if you are not on my site now, type «veshenka-expert.info» in the search engine, go to my site.

Mycelium must be purchased from certified laboratories. If you make mycelium yourself, you need to properly culture the strain. Otherwise, a moment may come when the mycelium overgrows very quickly, but practically does not form generative organs – that is, fungi.

How much mycelium is needed? The application rate of mycelium is from 3 to 5 percent of the weight of the substrate. The more growth points, that is, grains, and the more thoroughly they are mixed with the substrate, the faster the mycelium grows and forms primordia.

They will appear two or three days earlier. But this does not affect the weight of harvested mushrooms. 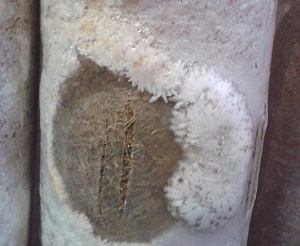 The cultivation passport specifies not only the dates for the start of fruiting, but also all the conditions that must be observed during the incubation period.

When the temperature in the incubator is below 14 degrees, overgrowing is extremely slow, sometimes primordia are formed on the 35-40th day, and the substrate overgrows with yellow spots.

If the air humidity in the incubator is below 80%, the perforations (slots) become dry and the appearance of primordia is delayed.

In order for mushrooms to be beautiful and heavy, all microclimate conditions must be optimal, not just one. If you have optimal temperature and humidity, but high levels of CO2, problems are bound to arise.

Imagine that one of the climate parameters shifts from the optimal one. Any parameter can be considered – humidity, flow rate, or temperature.

What can you do? There are two options.

First: you return this parameter to normal.

The second option is to adapt all other conditions to this bias factor.

Often we just have to do it, especially in winter.

For example, if you see that your boiler is not able to heat the grow chamber to the optimum temperature in severe frost, adjust the fresh air supply and humidity.

Otherwise, the mushrooms will not be able to breathe due to condensate and/or will draw out their legs from excess carbon dioxide.