The optimal microclimate for oyster mushrooms 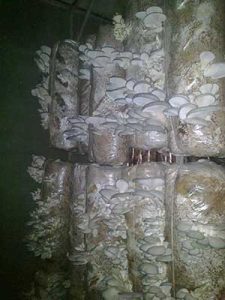 In summer, cooling is also required, with a chiller or cold water spray.

Growing oyster mushrooms in summer is not profitable in many regions.

Mushrooms should be stored in an industrial refrigerator. The refrigerator and cooling system consumes a lot of electricity.

What temperature is needed in the room for mushrooms?

The passport for growing oyster mushrooms must be provided by the manufacturer of the mycelium. There should be indicated the optimal mode of cultivation of a particular strain.

The passport indicates the temperature, humidity and CO2 level for each stage – incubation, growth of primordia and mushrooms, rest between waves.

The mode depends on the strain and is in the range:

This temperature should be maintained in the cultivation chamber in all seasons.

Growing under optimal conditions allows you to accelerate the ripening of mushrooms. The yield also increases, because the druze is dense, fleshy and heavy.

In the photo above – mushrooms that grew at low humidity and fresh air content of 20% of the total.

These are my first mushrooms grown in 2007 in an old dilapidated house. They were beautiful and I was proud of them. But you see, the caps are very thin and the clusters were light.

Summer and some general purpose strains can also be grown at 22-25 degrees if you have some experience in growing and adjusting the humidity for each particular strain.

And, of course, in this situation, the bunches will not be heavy, the caps will be thinner and their color will be light gray or white.

5-7 degrees above zero is the minimum temperature at which oyster mushrooms still grow, but slowly. In such a situation, it is already difficult to choose a humidity regime and a sufficient flow rate.

If the bags are on racks, hanging far apart, or on the floor, you can simply turn on the exhaust fan and thus provide a small flow of outside air.

In winter, in the cold, the clusters freeze, and when defrosted, they start growing again. Primordia most often die.

It is difficult to maintain optimal temperature and humidity in winter. And not only because heating is expensive. There is very little moisture in the frosty air, and at a temperature of minus 20C and below, there is practically none there.

Therefore, it is necessary to ensure such a mixing of flows that will allow you to work at 60-70% recirculation. Not only to save heat, but mainly to provide acceptable humidity.

Moisturizing for oyster mushrooms is the key to good harvests.

The stems and caps of oyster mushrooms are made up of mushroom tissue and 95% water.

Any jumps, excess or lack of moisture leads to the death of primordia and defects in older fruiting bodies.

82-89% is the humidity sufficient for the normal formation and development of mushroom clusters. The more specific value depends partly on the strain and on the temperature.

Fungi do not have such a perfect system of adaptation to environmental conditions as higher plants. Their cells are poorly differentiated, so they cannot grow in a dry atmosphere.

Primordia most often do not form at humidity below 78%.

If the moisture periodically rises higher, two or three separate fruits are formed, the rest are underdeveloped, shriveled.
When the air humidity is below 65%, the perforation dries up and the mycelium dies around the slot. A plug forms from dead micellar tissue.

There is no fruiting on such blocks until the slot gets wet, even if an optimal microclimate is made. New mycelial hyphae will penetrate to the surface of the perforation when it is well moistened and can form primordia.

When the moisture content is below 80%, the druse becomes weightless, whitish, loses its natural luster and brightens. 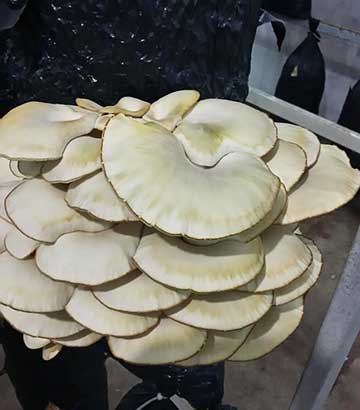 The oyster mushroom turns yellow with the formation of a brown dry rim if the air flow is at a high speed. The hat is as thin as a sheet of paper.

Or if the flow rate is normal (8-9 m/sec), but the cup-nozzle in the air duct has turned around and blows directly on the bunch.

Then, even with the general normal humidity in the room, the flow blows moisture from the hat.

Under the skin, a layer of pulp is not formed, only a hymenophore – as the oyster mushroom tends to grow in order to give spores sooner.

When moistening is slightly reduced, the fruiting bodies have a marketable appearance, but the edges of the cap are bent down, often becoming wavy.

In more detail, various deformations are described in the article “Diseases of oyster mushroom”

It depends on strain, temperature, ventilation pattern, and amount of recirculation.

Correction of the amount of moisture in the air must be done empirically.

Clusters often die from the effects of condensation at temperatures below 8 degrees.

The colder the air in the growing room, the slower the fruiting body grows. 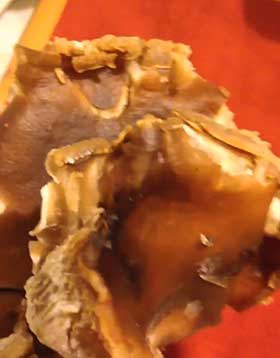 A variety of oyster mushroom, which is called pulmonaris, has an increased resistance to excessive moisture – drusen grow even in a fog of 95-97% humidity.

But, in such a climate, they become brittle, the hymenophore thickens and water is released if you press on the pulp of the mushroom, as in the photo.
The hymenophore grows, bends, and it seems that its ribs are connected to each other, like a mesh or a large-mesh sponge.

In general, we can conclude that the warmer the room, the higher the percentage of humidity should be.

What should be the humidity for oyster mushrooms?

But as a dogma, this rule cannot be accepted, it is better to ask the strain growing passport from the mycelium manufacturer.

If you want to have a stable high yield, you need to maintain stable conditions for an optimal microclimate.

Video about lack of moisture

Watch the video about the microclimate on the Patreon channel