Оyster mushroom disease with photo and descriptions of defects 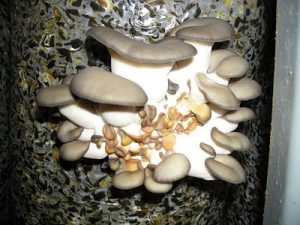 What is oyster mushroom diseases?

This is the collective name for all kinds of curvature of the caps and legs of the mushroom, which give it a non-marketable appearance. These defects are almost always associated with a violation of the microclimate:

– due to abrupt change (fluctuations) in temperature and humidity.

You yourself can provoke climate jumps in the chamber.

For example, the humidification system works on a timer – this cannot be done in the growing chamber.

If you don’t have climate controllers, you may not even know that temperature and humidity are fluctuating in your chamber.

We can see the reaction of fungi to microclimate fluctuations (jumps) in a few days. By the appearance of the mushrooms, you can determine which climate factor caused the defect. 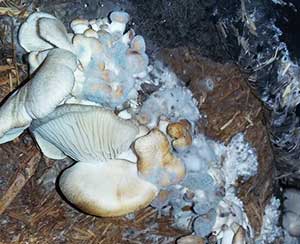 Many mushroom growers call bacteriosis any infectious lesion of dead mushrooms. But this is not true.

The cause of bacteriosis is Pseudomonas bacteria, there is a separate article about bacteriosis.

Let’s take a look at the photo.

Why is there mold on these mushrooms?

At first there was a lack of moisture in the air – the mushroom in the center is dry, with a lifeless brown color of the cap.

Those two mushrooms, which are higher and slightly to the left in the photo, began to develop later, when the humidity was made higher.
But they raised it either too high, or too fast.

Therefore, the mushrooms turned their hats up, exposed the hymenophore so that they could evaporate their own moisture.

But these moisture surges killed the mushrooms. Condensation began to settle on dead mushrooms, and mold grew on it. 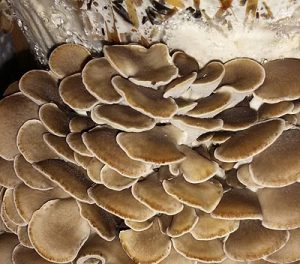 The surface of the mushroom caps turns yellow, begins to dry out, crack and change color, even with optimal humidity. The edges of the caps turn brown, they are dry and warm to the touch.

When oyster mushrooms crack, the edges of the cap burst and tear.

Sometimes this happens after the bunch has been picked, sometimes on the bag itself. At normal airflow rates, cap rupture occurs if low humidity rises periodically. For example, when watering the floor with water.

You need to keep the humidity in the chamber constant! And at least 83% -90% – depending on the temperature in the growing chamber and the strain.

If the air speed is slightly higher than optimal, the edges of the caps fall, protecting the hymenophore from drying out. This is especially noticeable if the air humidity is also below optimal. 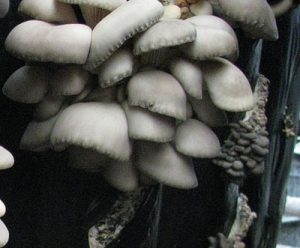 The edge of the mushroom cap becomes wavy and / or forms small growths, as in the photo.

If the oyster mushroom cap is bent down, this clearly indicates a slight lack of humidity (80-83%) in the growing chamber.

If the humidity drops even lower, the oyster mushroom becomes light and dry. The hymenophore becomes thinner and becomes white or yellowish.

The fungus ages quickly to release spores faster. In this case, the mushroom consists only of skin and plates; it does not contain mushroom pulp, which is why it is light.

Therefore, the caps are wrapped up, opening the hymenophore. See image below.

The first is to purchase an anemometer device and measure the flow rate by attaching the device directly to the outlet of the nozzle-cup in the air duct. 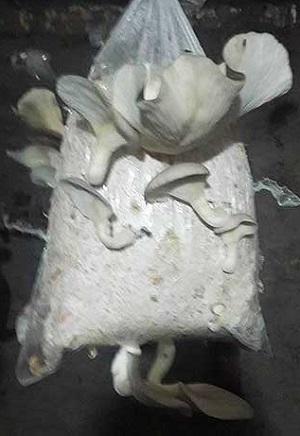 What I mean when I say “nozzle-cup” can be seen in this photo.

If you have a two-zone growing system, then the speed should be 8, maximum 10 m/s.

Secondly, check the humidity in the chamber with another device, not the one that is in your chamber, or re-calibrate your device.
This can be done either in a metrological laboratory, or by yourself using a highly sensitive, but rather expensive aspiration psychrometer.

The clusters that you see above on the right, better than any device, indicate that there is not enough moisture.

Oyster mushroom turns yellow and dries due to lack of moisture. If at the same time your psychrometer shows 89%, this clearly indicates the need for its verification.

There should be several devices measuring humidity in the chamber, directly in the rows, not far from the growing clusters.

Third, check which way your cups are blowing. If they turned to the sides, or fell out of the duct, eliminate these shortcomings.

And check the recirculation filter – if it is dirty, the humidity in the chamber may drop.

On the topic of humidity, I have a video with high-quality English subtitles.

Exceeding the level of CO2

The appearance of mushrooms differs depending on how much the level of carbon dioxide is exceeded and at what stage of development the primordia was damaged. 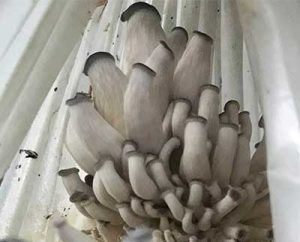 At the same time, the oyster mushroom is twisted or pulled into a tube or pressed against the film on the block. To describe the appearance of such a fruiting body, different comparisons are used:

And all this all arises from an excess of CO2, and the degree of deformation depends on its amount and related factors.
In this condition of the mushrooms, it is necessary to check the correct installation and operation of the ventilation system.

As a rule, several factors are present in such a situation: in addition to increased CO2, one can also observe a low rate of moisture evaporation in fungi.

When the flow rate is insufficient, it cannot take away the carbon dioxide and the cloud of moisture accumulated as a result of the respiration of the fungi.

Therefore, the symptoms can be mixed, and fungal drusen of different ages look different.

Oyster mushrooms have a thick stem and a small cap – most often this indicates that in the early stages of development of primordia there was a large amount of carbon dioxide.

All defects in which the stem is thin or thick, and the hat is small are described in the article “The effect of carbon dioxide” (Please use google translate) 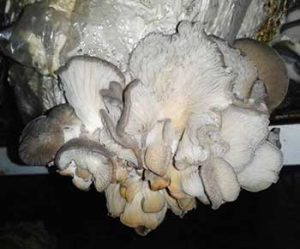 A common cause of ugly shape and yellowing of mushrooms is a soaked substrate. For example, twisted oyster mushroom.

The entire fruiting body turns inside out (bends) and becomes wavy. The cap turns yellow.

If the mushrooms are bent only because of the increased carbon dioxide, they have normal flesh.

In case of excess water in the substrate, the oyster mushroom is not elastic and watery to the touch.

If you squeeze it in your hand, water flows, and the pulp comes out in lumps between your fingers. Often the mushroom smells unpleasant. Such oyster mushroom cannot be eaten and pickled.

Read more about the problem of overwetted substrate here.

Growths and pimples on oyster mushroom

White growths on the cap of oyster mushrooms, similar to semolina or netting, form at low temperatures in combination with high levels of CO2 in the growing chamber. 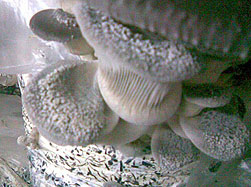 This white semolina is the so-called secondary mycelium – hyphae form on the hat under adverse environmental conditions. Small primordia may even appear on the mushroom cap from such hyphae.

Such mushrooms can be eaten – if you convince the buyer that everything is in order with them.

Growths along the edge of the cap, which look like pimples, appear with a significant increase in humidity (by 3-5%) with a simultaneous increase in CO2 concentration.

This happens if, on a frosty night, the operator closes the fresh air damper by a large % at a time.
The humidity nozzles continue to work, and the humidity is rising.
Small mushrooms form an outgrowth on the skin, but it is visible only after a day or two. 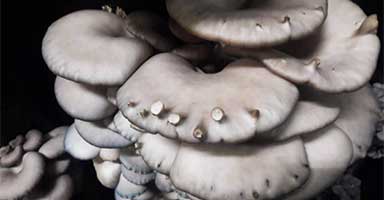 Curved and wavy oyster mushroom caps with pimples on the edges

In severe frosts (below minus 12C), the outside air contains little moisture.
If you use mostly frosty outside air and a low percentage of recirculation, a paradox arises: the humidification nozzles operate at maximum mode, but the humidity is still low. 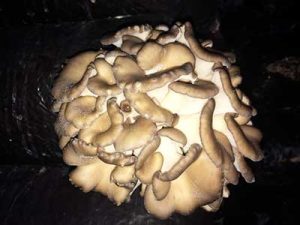 This happens because the air flow does not have time to absorb moisture, since the flow rate is high, and the time of air interaction with the nozzles is short.

Therefore, many mushroom growers also hang nozzles in the chamber itself, under the ceiling.
If you turn them on periodically, it doesn’t matter, from a timer or a humidity sensor, a wavy edge forms on the oyster mushroom, and often the entire mushroom cap becomes wavy.

Especially bizarre curliness occurs if the air in the ducts is not humidified at all and a stream of dry air comes out of them, which is warmer than the air in the chamber.

It is not uncommon when scales are visible on the cap of such fruits, as in the photo – these are dead exfoliated skin cells. These scales, like infantry, are especially noticeable on the left side of the bunch.

What to do in such cases?

Adjust ventilation to use the minimum amount of outside air. But, at the same time, the shape of the oyster mushroom hat should be acceptable for sale.

If you are unable to heat up the grow chamber in severe frosts, lower the temperature gradually by 1-2C every 4-5 hours.

Don’t forget to also reduce the humidity according to your strain’s passport!

At low temperatures, mushrooms grow slowly and have a beautiful shape if the amount of moisture, carbon dioxide and temperature are in balance.

Why is oyster mushroom blue? 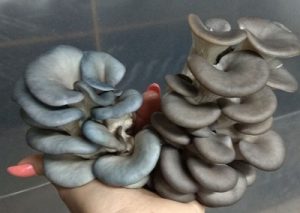 If the strain normally has a gray color, it is more likely to turn blue with a sharp drop in temperature. Note that the temperature in the grow room must drop just sharply to cause blueing.

The younger the mushrooms were at the time the temperature dropped, the higher the probability of changing the color of the cap.

What happens to primordials in this case?

There are two options for the development of events:

The effect of furnace gas on oyster mushroom

If the growing chamber is heated by a stove or wood-fired boiler, oyster mushrooms can be poisoned by stove gases.
The fruits at the same time acquire a color that is not characteristic of this strain with a light brown tint. 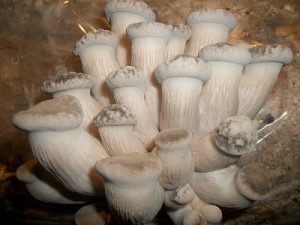 With further exposure to smoke appears:

Flue gases can enter the chamber in two ways:

Such mushrooms are not eaten. Most likely, the discoloration of the cap is due to the partial dissolution of sulfur oxides in the humid air of the growing chamber.

The condensate is deposited on the caps, and since it contains an insignificant admixture of acids formed from sulfur oxides, the development of the mushroom plate is disturbed and the fungus dies. 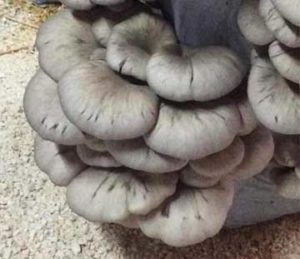 Dark, radially divergent stripes appear on the cap due to moisture fluctuations in the growing room.

These are ruptures of cell layers that formed during those hours when the humidity was the lowest.

On some mushrooms, the stripes are black and buyers are afraid to purchase such a product.

In the photo – a druse that has grown with moisture fluctuations from 80 to 86%.

The disk humidifier was turned on only twice a day, plus the floors were watered.

Note also the curved down and wavy edges of the oyster mushroom.

If you have such a problem, you need to adjust the humidification system so that there are no fluctuations in humidity.

Watch videos with English subtitles on my YouTube channel